Eid-E-Milad-Un-Nabi 2020: PM Narendra Modi Extends Greetings to People of Nation, Hopes for Compassion and Brotherhood All Around

Prime Minister Narendra Modi on Friday extended greetings to people on the nation on the occasion on Milad-Un-Nabi. Taking to Twitter, the Prime Minister hoped there is compassion and brotherhood all around. The festival is also known as Mawlid, Mawlid al-Nabi al-Sharif. Mawlid is derived from the Arabic root word meaning to give birth or bear a child or descendant. 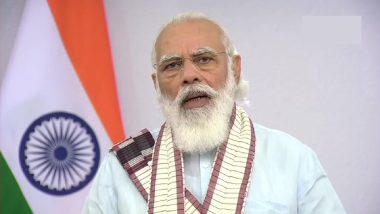 The festival is also known as Mawlid, Mawlid al-Nabi al-Sharif. Mawlid is derived from the Arabic root word meaning to give birth or bear a child or descendant. In contemporary usage, Mawlid refers to the observance of the birthday of Muhammad.  It is the observance of the birthday of the Islamic prophet Muhammad which is commemorated in Rabi' al-awwal, the third month in the Islamic calendar. Rabi ul-Awal 2020 Mubarak Greetings: WhatsApp Messages, Rabiul Awwal 1442 Quotes, Eid Milad-Un-Nabi HD Images, Mawlid Photos And SMS to Send on Prophet's Birthday.

Best wishes on Milad-un-Nabi. Hope this day furthers compassion and brotherhood all across. May everybody be healthy and happy. Eid Mubarak!

The history of this celebration goes back to the early days of Islam when some of the Tabiun began to hold sessions in which poetry and songs composed to honour Muhammad were recited and sung to the crowds. It has been said that the first Muslim ruler to officially celebrate the birth of Muhammad in an impressive ceremony was Muzaffar al-Din Gokbori. The Ottomans declared it an official holiday in 1588, known as Mevlid Kandil.The term Mawlid is also used in some parts of the world, such as Egypt, as a generic term for the birthday celebrations of other historical religious figures such as Sufi saints.

(The above story first appeared on LatestLY on Oct 30, 2020 09:17 AM IST. For more news and updates on politics, world, sports, entertainment and lifestyle, log on to our website latestly.com).