The Delhi government on Friday rejected request of Delhi Police for converting nine stadiums into temporary prisons in the view of ongoing farmers protest. The government said that the farmers' demands are legitimate and the Centre should accept them. 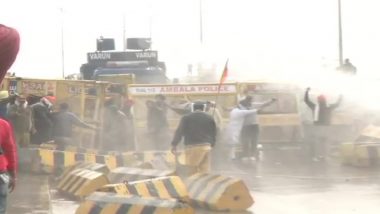 New Delhi, November 27: The Aam Aadmi Party (AAP) government in Delhi on Friday rejected request of Delhi Police for converting nine stadiums into temporary prisons in the view of ongoing farmers protest. The government said that the farmers' demands are legitimate and the Centre should accept them.

The Delhi government stated, “Putting farmers in jail is not a solution. Their protest is completely non-violent. Doing non-violent protest is the constitutional right of every Indian. They cannot be put behind bars. Due to this reason, request of Delhi to convert nine stadiums into jails is rejected.” Farmers Protest Latest Updates: Trucks, Barbed Wires Placed as Barriers, Delhi Police Seek Permission to Convert Stadiums Into Temporary Prisons.

Earlier in the day, Delhi Police resorted to firing tear gas shells to disperse protesting farmers as they reached Singhu border (Haryana-Delhi border). The Delhi Police had also asked for nine stadiums from the Aam Aadmi Party government to detain the farmers in case they manage to enter the national capital. Police had even tried to negotiate with a delegation of farmers. 'Delhi Chalo' March Against Farm Laws: Farmers From Punjab Jump Barricades in Sirsa, Say Ready To Stay Even For A Month, Can Attain Martyrdom For Their Rights.

There are 32 unions of farmers among others who are taking various routes, Singhu, Tikri and all peripheral towns of the capital are witnessing massive protests. Farmers from Punjab are also trying to cross the Haryana border to march towards the national capital. Farmers across the country especially from Punjab and Haryana are protesting against the Farm Laws, which were enacted in September this year. They are demanding that the Centre should repeal these laws.

(The above story first appeared on LatestLY on Nov 27, 2020 01:52 PM IST. For more news and updates on politics, world, sports, entertainment and lifestyle, log on to our website latestly.com).