In a direct attack on Prime Minister Narendra Modi, farmer leaders on Sunday urged people to bang plates during his "Mann Ki Baat" radio programme, scheduled to be aired on December 27. 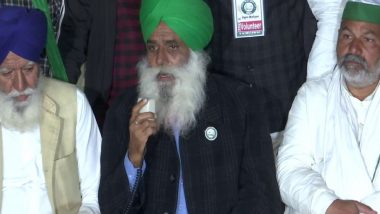 "On December 27, during Prime Minister Modi's Mann Ki Baat, we would appeal to everyone to beat utensils at their homes till the time he speaks," Jagjit Singh Dalewala of Bharatiya Kisan Union said. Here it may be noted that PM Narendra Modi, in his address to the nation prior to countrywide lockdown in March, had appealed people to clap and bang plates and pans to show support for healthcare and frontline workers fighting COVID-19. Farmers' Protest: Centre, In Proposal Sent to Farmers, Says 'Ready to Give Written Assurance on Continuing MSP'.

"We have decided to start 24 hours relay hunger strike starting tomorrow at all protest sites," Yogendra Yadav of Swaraj India said. "Kisan Diwas is celebrated on December 23, I would urge people to skip a meal on that day," BKU's Rakesh Tikait added. Farmer leaders also announced they will make the toll plazas in Haryana free from December 25 to December 27.

Farmers leader Jasbir Singh Bhatti said: "The government is trying to defame the farmers. The farmers are protesting in these cold nights... the government should think about us but they are busy defaming us." "I will appeal to the Agriculture Minister and the government to drop their ego. I will appeal to youth and children to be calm," he said. Earlier today, the agitating farmers paid tribute to the farmers who lost their lives during this agitation.

Thousands of farmers are protesting against The Farmers Produce Trade and Commerce (Promotion and Facilitation) Act, 2020; The Farmers (Empowerment and Protection) Agreement of Price Assurance and Farm Services Act, 2020; and The Essential Commodities (Amendment) Act, 2020.

(The above story first appeared on LatestLY on Dec 20, 2020 07:21 PM IST. For more news and updates on politics, world, sports, entertainment and lifestyle, log on to our website latestly.com).