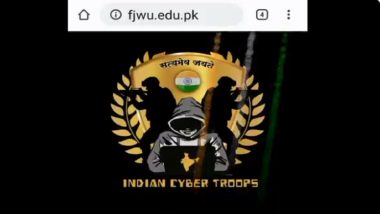 Islamabad, August 15: The website of Pakistan's Fatima Jinnah Women University was hacked by an online group identifying themselves as "Indian cyber troops" on Saturday, when India observed its 74th Independence Day. The hackers posted greetings on Indian Independence Day 2020 and also left a message on the website's landing page stating that a Ram Mandir would soon be built in Lahore and Karachi.

Images of the Hindu deity Ram, Indian tricolour national flag were also pasted on the landing page by the hackers who had briefly taken over fjw.edu.pk - the official website of the female varsity based in Rawalpindi town of Pakistan's Punjab. Pakistan's News Channel Dawn Hacked, Indian Flag With Happy Independence Day Message Surfaces on Screen (Watch Video).

Journalist Naila Inayat, who is based in Pakistan, shared a video with screenshots of all the messages that were posted by the hackers after gaining control of the University's website.

"Ramlalla aayenge aur Mandir Lahore Karachi Mei Banayenge (Ramlalla we will come, the temples will also be built in Karachi and Lahore)," read one of the messages. "Thousands of people have sacrificed their sacrifices because of which our country is celebrating this day today," another message read.

The University authorities succeeded in reclaiming control of the website shortly after being hacked. The cyber attack comes days after the hackers had briefly taken over the website of Dawn, one of the leading newspapers of Pakistan.

(The above story first appeared on LatestLY on Aug 15, 2020 08:11 PM IST. For more news and updates on politics, world, sports, entertainment and lifestyle, log on to our website latestly.com).