A case has been registered against Facebook CEO Mark Zuckerberg over an alleged controversial post against Samajwadi Party chief Akhilesh Yadav. 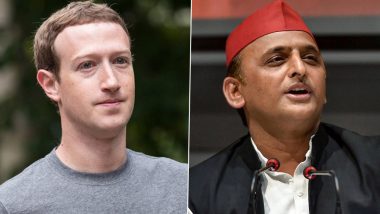 Kannauj, December 1: A case has been registered against Facebook CEO Mark Zuckerberg over an alleged controversial post against Samajwadi Party chief Akhilesh Yadav.

The case has been filed at a court in Kannauj district.

The FIR names 49 others, apart from Zuckerberg.

Zuckerberg himself has not posted any defamatory post against Yadav. The FIR names him because his platform was used to post derogatory comments against Yadav. Twitter Update: People Can't Share Photos of Others Without Consent.

Amit Kumar, a resident of Sarahati village in Kannauj district, has filed a case against Zuckerberg and 49 others for posting defamatory comments against Akhilesh Yadav.

In his application before the court, Kumar has alleged that an attempt to tarnish the image of Samajwadi party chief was made on a Facebook page titled "Bua Babua".

Kumar had sent an application to the Superintendent of Police on May 25 but his application fell into deaf ears. Following which, he went to court and demanded that a case be registered against the admin of the Facebook page along with the CEO Zuckerberg.

Chief Judicial Magistrate Dharamveer Singh asked the police to lodge the case at the behest of Kumar.

The term "Bua Babua" was coined when BSP chief Mayawati and Akhilesh Yadav, the popular political rivals, formed an alliance in the 2019 parliamentary election.

"During the course of investigation Zuckerberg's name was dropped, even as investigation is being carried out against the administrator of the (Facebook) page," said a senior police official.

(The above story first appeared on LatestLY on Dec 01, 2021 02:33 PM IST. For more news and updates on politics, world, sports, entertainment and lifestyle, log on to our website latestly.com).