Popular electronic dance music (EDM) Sunburn festival organised by Percept Live, one of the highlights of the state's year-end tourism itinerary, will not be held this year. 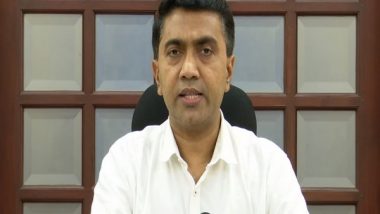 Panaji, November 24: Popular electronic dance music (EDM) Sunburn festival organised by Percept Live, one of the highlights of the state's year-end tourism itinerary, will not be held this year.

Chief Minister Pramod Sawant on Wednesday said that his office had rejected a file moved by the Tourism Ministry to permit the organising of the event which is held around December-end in the coastal state. Goa CM Pramod Sawant’s Facebook Account Hacked, Complaint Filed.

"We have not given permission for Sunburn this year. My office has already processed the file," Sawant told reporters after a cabinet meeting. Goa Tourism Minister Manohar Ajgaonkar said that he was of the opinion that the festival should be organised, but added that the Chief Minister's word on the issue was final.

"Any decision on hosting any event is taken by the CM. They (CMO) know the pandemic situation and the SOPs. The file had come to us, we had sent it to (CMO) for a decision. The final decision is taken by the CM," Ajgaonkar said, adding that Sawant may have made the call keeping the Covid situation in the state in mind.

"I felt that it should be held. I wanted it to happen. What people want should happen. The CM has taken a decision after studying the matter. I cannot take any decision, without final approval from the CM. The CM has not informed me about rejecting the file yet," Ajgaonkar said.

(The above story first appeared on LatestLY on Nov 24, 2021 03:57 PM IST. For more news and updates on politics, world, sports, entertainment and lifestyle, log on to our website latestly.com).