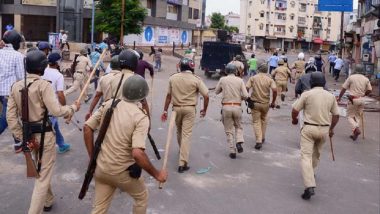 Chhota Udepur, May 28: The Gujarat police on Thursday booked 15 people after a video of a 16-year-old tribal girl from Bilvant village in state's Chhota Udepur district allegedly thrashed by three men in public went viral on social media. The girl’s father registered a complaint against the men who thrashed her. The complaint was registered at Rangpur police station. Video of Woman in Uttar Pradesh Being Mercilessly Thrashed in Public by Her Husband Goes Viral!.

According to a report published in The Indian Express, all the people who were booked by the police in the case, include the man who shot the video and those witnessed the assault and did not come forward to help the girl. The three relatives of the girl were also booked. All the accused were booked under various sections of the Indian Penal Code, including 147, 148, 149, 323 and 325 and under relevant sections of the Protection of Children from Sexual Offences (POCSO) Act. Uttar Pradesh Shocker: Teenager Posts Girl’s Image in Tik-Tok Video, Gets Thrashed in Public After Panchayat Order (Watch Video).

The incident took place on May 21, and the video surfaced on social media on Wednesday. The girl was beaten in the presence of her father. He was forced to the thrashing of his daughter. The initial investigation by police revealed that the three men were angry with the girl as she had eloped with a man recently. She was first flogged hard with a stick by one of the three accused men with another one holding her. Then, the other two men brutally punch the tribal girl on the face and back. The three accused were identified by the police as Desingh Rathva, Bhipla Dhanuk and Udelia Dhanuk.

(The above story first appeared on LatestLY on May 28, 2020 04:33 PM IST. For more news and updates on politics, world, sports, entertainment and lifestyle, log on to our website latestly.com).