The Supreme Court on Friday said there is "no tittle of material" to prove that 2002 Gujarat riots were pre-planned and the inaction of some state officials can't be the basis to term it as a state-sponsored crime against the minority community. 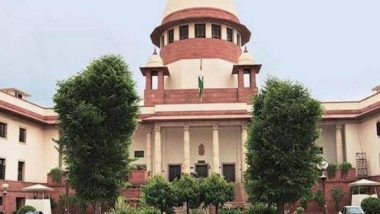 New Delhi, June 24: The Supreme Court on Friday said there is "no tittle of material" to prove that 2002 Gujarat riots were pre-planned and the inaction of some state officials can't be the basis to term it as a state-sponsored crime against the minority community.

A bench, headed by Justice A.M. Khanwilkar and comprising Justices Dinesh Maheshwari and C.T. Ravikumar, said: "Suffice it to observe that there is no tittle of material, much less tangible material to support the plea of the appellant that the Godhra incident unfolded on February 27, 2002 and the events which followed, was a pre-planned event owing to the criminal conspiracy hatched at the highest level in the state." Supreme Court Upholds Death Penalty to Man for Rape & Murder of 8-Year-Old Disabled Girl, Says ‘No Probability of Reformation, Danger to Society’

It noted that inaction or failure of some officials of one section of the state administration cannot be the basis to infer a pre-planned criminal conspiracy by the authorities of the state government or to term it as a state sponsored crime (violence) against the minority community.

"Such inaction or negligence cannot pass the muster of hatching a criminal conspiracy, for which the degree of participation in the planning of commission of an offence of this magnitude must come to the fore in some way. The SIT was not there to enquire into the failures of the state administration, but the remit given to it by this Court was to enquire into the allegations of larger criminal conspiracy (at the highest level)," the top court said.

Upholding the SIT's clean chit to then Gujarat Chief Minister Narendra Modi and 63 others in the 2002 riots, the bench said there must be credible evidence regarding state sponsored breakdown of law-and-order situation, and not spontaneous or isolated instances or events of failure of state administration to control the situation. Bulldozer Action in UP: ‘Demolitions Can’t Be Retaliatory Measure’, Says Supreme Court

"The breakdown of law and order situation in the state including attributable to the alleged inaction of the (state) duty holders, owing to spontaneous mass violence, cannot be a safe measure to infer as being a part of the criminal conspiracy at the highest level of political dispensation unless there is clear evidence to so conclude regarding meeting of the minds of all concerned," it held.

The bench said the SIT had not found any conspiracy for linking the separate incidents of mass violence across the state during the investigation of nine separate crimes including the Godhra train incident, dealt with by the SIT under the strict vigil and supervision of this court and ably assisted by the amicus curiae playing the role of devil's advocate.

It pointed out that overrunning of state administration is not an unknown phenomenon and cited the second wave of pandemic, where countries with even the best of medical facilities crumbled and their management skills were overrun under the pressure.

"Can it be said to be a case of hatching a criminal conspiracy? We need not multiply such instances of overrun. Breakdown of law and order situation if for short duration, cannot partake the colour of breakdown of rule of law or constitutional crisis. To put it differently, misgovernance or failure to maintain law and order during a brief period may not be a case of failure of constitutional machinery in the context of tenets embodied in Article 356 of the Constitution," said the bench.

The top court said Zakia Jafri, wife of killed Congress leader Ehsan Jafri, had gone to the extent of suggesting that the two train bogies were put on fire as a part of pre-planned conspiracy hatched by the highest authority. "This is only a figment of imagination, preposterous and in disregard of the hard facts discernible from the material collected by the SIT including in the investigation concerning Godhra incident clearly spelling out the manner in which that incident had occurred. The trial of that case has established the involvement of accused who had been convicted for being responsible for the said incident and appeal therefrom is pending in this court," it added.

The top court said for being involved in the crime of criminal conspiracy, there ought to be positive material indicative of deliberate act of commission and omission and meeting of minds of the concerned persons, which was completely absent and not forthcoming during the investigation conducted by the SIT.

"The allegation in the present case, if at all relevant, was founded on falsehood of the claim of Sanjeev Bhatt and Haren Pandya regarding the utterances of the then Chief Minister in review meeting chaired by him - which stood completely exposed after the investigation by the SIT," it said.

(The above story first appeared on LatestLY on Jun 24, 2022 08:00 PM IST. For more news and updates on politics, world, sports, entertainment and lifestyle, log on to our website latestly.com).