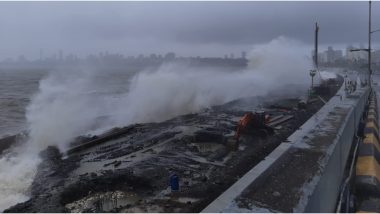 Mumbai, August 6: Amid the heavy rainfall in the financial capital for last two consecutive days, high tide hit the shores of Mumbai's Marine Drive on Thursday. As per the India Meteorological Department, the high of 4.44 metres or 14.57 feet hit the Mumbai shore at 1:50 pm. Citing this, Maharashtra Chief Minister Uddhav Thackeray had asked people to stay put in a safer place as rains may continue from a few days.

Earlier on Thursday, reports arrived that Mumbai's Colaba received 331.8 mm and Santacruz received 162.3 mm rainfall in past 24 hours. This is considered to be the heaviest rainfall in the past 46 years, as Mumbai recorded 64 per cent of its monthly quota of rain in the five days of August. High Tide Timing in Mumbai For Today: Wave Measuring 4.33 Metres Expected at 1.51 PM, Says IMD.

Here's the video of high tide hitting the shores of Mumbai's Marine Drive:

In Mumbai, the high tide and low tide timings are keenly observed especially during the monsoon season. Apart from the rainfall, IMD on Thursday predicted strong winds reaching 60-70 kmph occasionally gusting to 80 kmph in Mumbai. The Met department also sighted the possibility of thunder or lightning in some areas.

Following the torrential rains, rainwaters entered Mumbai's Nair Hospital. The corridors of the hospital were seen flooded. Meanwhile, Brihanmumbai Municipal Corporation has appealed the people to avoid BPT colony skywalk as it is waterlogged and informed about the BEST bus diversions near Nair Hospital.

(The above story first appeared on LatestLY on Aug 06, 2020 04:02 PM IST. For more news and updates on politics, world, sports, entertainment and lifestyle, log on to our website latestly.com).