He added Constitution, together with the immense faith of the people in the judicial system, brought to life the Supreme Court's motto, "Yato Dharma Sthato Jaya, that is, where there is dharma, there is victory". 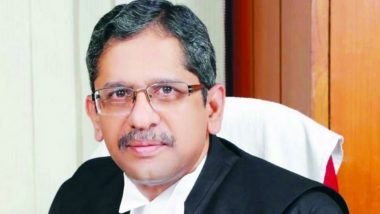 New Delhi, July 17: Chief Justice N.V. Ramana on Saturday said people are confident that they will get relief and justice from the judiciary, and they also know that when things go wrong, the Supreme Court, as the guardian of the largest democracy, will stand by them.

Delivering his keynote address at the India-Singapore mediation summit "Making Mediation mainstream: Reflections from India and Singapore", the Chief Justice said India is home to many identities, religions and cultures which contribute to its unity through diversity, and this is where the rule of law, with assured sense of justice and fairness come into play.

"People are confident that they will get relief and justice from the judiciary. It gives them the strength to pursue a dispute. They know that when things go wrong, the judiciary will stand by them. The Indian Supreme Court is the guardian of the largest democracy," said the Chief Justice. Mediation as First Step on Conflict Resolution is Need of Hour, Says CJI Ramana.

He added Constitution, together with the immense faith of the people in the judicial system, brought to life the Supreme Court's motto, "Yato Dharma Sthato Jaya, that is, where there is dharma, there is victory".

Chief Justice Ramana said conflicts are unavoidable in any society for a variety of reasons -- political, economic, social, cultural and religious. He emphasized that with conflicts, there is also the need to develop mechanisms for conflict resolution. India, and numerous Asian countries, have a long and rich tradition of collaborative and amicable settlement of disputes, he cited.

"Mediation...can be described as a tool of social justice in the Indian context. Such a party-friendly mechanism ultimately upholds the rule of law, by providing an incentive for parties to utilize their autonomy to the fullest to arrive at a just and equitable outcome," said the Chief Justice.

He said Mahabharata, is an example of an early attempt at mediation as a conflict resolution tool, where Lord Krishna attempted to mediate the dispute between the Pandavas and Kauravas. It may be worthwhile to recall that the failure of mediation in Mahabharata led to disastrous consequences, he cited.

The Chief Justice emphasized mediation, as a concept, is deeply embedded into the Indian ethos, long before the arrival of the British adversarial system in India. "The establishment of the British courts system, in 1775, marked the erosion of community-based indigenous dispute resolution mechanisms in India," said Chief Justice.

He also took strong objection on the statistics regarding pendency and added that, it is often stated there are 45 million pending cases and it's said, because courts cannot handle it. "It is an uncharitable analysis. Cases filed yesterday get added to the list and thus is not a useful indicator to see how well a system is doing. Issue of judicial delays is a complex problem and just not in India," he opined.

He praised the legal aid programme and termed it, a "remarkable achievement," which had ensured easier access to justice to nearly 70 per cent of the population, particularly the poor, women, children, minorities, senior citizens and the differently abled.

Justice Ramana cited the impact of grassroots alternative dispute resolution (ADR) mechanisms like Lok Adalats organised by legal services authorities. "I have personally seen disputes that have subsisted for decades get resolved through the process of mediation, within a short time," he emphasized, stating that it is time for India to enter mission mode to popularise mediation as cheaper and faster dispute resolution mechanism.

(The above story first appeared on LatestLY on Jul 17, 2021 05:10 PM IST. For more news and updates on politics, world, sports, entertainment and lifestyle, log on to our website latestly.com).