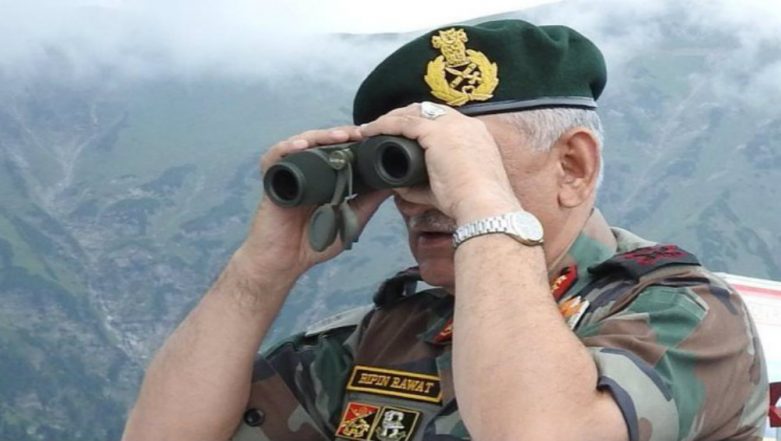 New Delhi, August 31: Army Chief General Bipin Rawat reviewed readiness of security agencies against ceasefire violations by Pakistan along the LoC in Jammu and Kashmir on the concluding day of his two-day visit to the valley on Saturday.

Rawat, who is on his first visit to the valley following withdrawal of special status to the state on August 5, visited the Line of Control along with Northern Army Commander Lieutenant General Ranbir Singh. Debt Ridden Pakistan's Decision to Close Airspace for Indian Airlines to Add More Financial Crunch: Report.

The top Army officers reviewed the prevailing situation in the valley and operational readiness of the units of the White Knight Corps. The General-Officer-Commanding of White Knight Corps Lt Gen Paramjit Singh Sangha briefed them about the situation on the ground.

An Army official said Gen Rawat reviewed mission readiness of the units, response mechanism to ceasefire violations, measures adopted to deal with Pakistan's proxies, counter-infiltration postures and preparation to deal with violent actions on the LoC.

There have been more than 222 instances of ceasefire violations by Pakistan along the LoC since August 5.

The Army Chief was also briefed on the strategy to deal with inimical elements who are attempting to revive terrorism south of the Pir Panjal range and attempts to radicalise youths in the valley. He also interacted with soldiers deployed on the LoC.