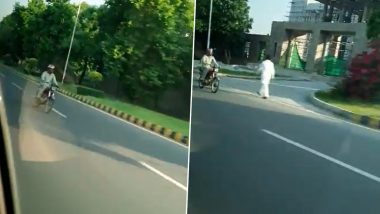 Islamabad, June 4: A video allegedly showing a member of Pakistan's Inter-Services Intelligence (ISI) following Indian Charge d'Affaires Gaurav Ahluwalia in Islamabad has surfaced on the internet. The video is shared by news agency ANI. It shows a man, purportedly an ISI member, chasing the car of Indian Charge d'Affaires Gaurav Ahluwalia in Islamabad. This was an attempt to intimidate Ahluwalia, ANI reported. India Lodges Strong Protest With Pakistan Over Vandalism of Buddhist Carvings in PoK's Gilgit-Baltistan.

India and Pakistan have been in a diplomatic tussle over "harassment" of their envoys. Both countries had in past lodged protests alleging their diplomats were subjected to harassment. According to ANI, ISI has stationed multiple persons in cars and bikes outside Ahluwalia's official residence in Islamabad to harass and intimidate him. In 2018, Pakistan had cut off the power supply to a residential complex owned by India. Nuclear War Between India, Pakistan Possible If Major Terror Attack Happens in Kashmir, May Leave 125 Million People Dead: Report.

#WATCH Islamabad: Vehicle of India's Chargé d'affaires Gaurav Ahluwalia was chased by a Pakistan's Inter-Services Intelligence (ISI) member. ISI has stationed multiple persons in cars and bikes outside his residence to harass and intimidate him. pic.twitter.com/TVchxF8Exz

Pakistan had also put former Indian High Commissioner Ajay Bisaria and other diplomat’s application seeking membership of the prestigious Islamabad Club on hold, which led to allegations and counter-allegation between the two neighbours. Islamabad Club is a circle of Pakistani elite and foreign diplomats and it’s customary for an ambassador or high commissioner to seek membership after landing in Pakistan’s capital.

(The above story first appeared on LatestLY on Jun 04, 2020 07:59 PM IST. For more news and updates on politics, world, sports, entertainment and lifestyle, log on to our website latestly.com).