Indian space agency ISRO will launch the country's latest military communications satellite, the GSAT-7 this evening for the Indian Air Force. The GSAT-7 satellite will be carried aboard a Geosynchronous Satellite Launch Vehicle (GSLV Mk II) that will be launched from Satish Dhawan Space Centre (SDSC) in Sriharikota at 4:10 pm. 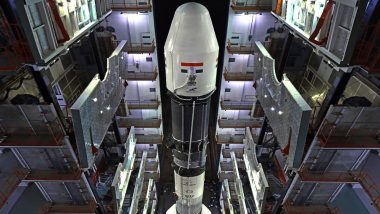 The GSLV rocket will inject the 2,250-kg GSAT-7A into a geosynchronous transfer orbit (GTO), just over 19 minutes after the lift-off, according to ISRO. The GSAT-7A will be lifted to its final geostationary orbit from the GTO. It is the 35th Indian communication satellite built by ISRO. The satellite is built to provide communication capability to the users in Ku-band over the Indian region. ISRO PSLV-C43 Launch Today: HysIS Satellite to Be Launched, 30 Satellites From 8 Countries on Board; Here’s All You Need to Know.

After the successful launch of GSLV Mk II, carrying GSAT-7A, the IAF will use the communication satellite to interlink different ground radar stations, airbases and AWACS aircraft. This will enhance the air force capabilities for network-centric warfare and global operations. Drone operations of the IAF will also get a boost as the satellite will enhance the range, endurance and flexibility of military unmanned aerial vehicles (UAVs).

"There is increased demand for satellites from strategic sectors. About six/seven satellites are planned to be built," a senior official of Indian Space Research Organisation (ISRO) told IANS, preferring anonymity. In November, ISRO put into orbit the sharp-eyed HysIS satellite for a range of applications and the data is generated by it will also be accessible by the Indian military.

In 2013, ISRO had sent up the GSAT7, or Rukmini, a communication satellite, for use by the Indian Navy.

(The above story first appeared on LatestLY on Dec 19, 2018 09:20 AM IST. For more news and updates on politics, world, sports, entertainment and lifestyle, log on to our website latestly.com).