Jaffer Bhai Mansuri Dies at 83 Due to Cardiac Arrest, Mumbai's 'Biryani King' And 'Delhi Darbar' Owner Was Being Treated For Coronavirus 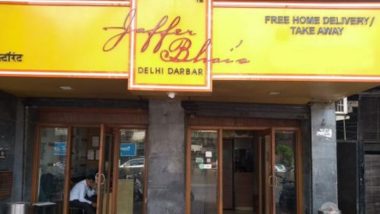 Mumbai, September 11: Jaffer Bhai Mansuri, popularly known as Biryani King of Mumbai died on Thursday. He was 83 years and passed away due to cardiac arrest at Breach Candy Hospital, where he was admitted for treatment of coronavirus. According to a Hindustan Times report, Mansuri's oxygen saturation level decreased and he was shifted to the ventilator earlier this month. Breach candy hospital confirmed that he died due to heart attack.

The 83-year-old is survived by four sons and three daughters. His demise his being mourned by the hotel industry. Jaffer Bhai was one of the founder-members of AHAR when the association was formed in 1979.

In 1973, Mansuri founded the Delhi Darbar restaurant in Grant Road, Mumbai. In 2006, he set up a chain of restaurants called ‘Jaffer Bhai’s Delhi Darbar’ after branching out from the family business. His restaurant is extremely popular in the city for its tasty kebabs and mouth-watering biryani

(The above story first appeared on LatestLY on Sep 11, 2020 03:21 PM IST. For more news and updates on politics, world, sports, entertainment and lifestyle, log on to our website latestly.com).