An FIR has been filed against a viral video showing the burning of Lord Ram's effigy in Jalandhar on the complain of advocate Ashok Sarin. MukeshKumar, Sub-Inspector Jalandhar Police said actions will be taken based on the investigation. 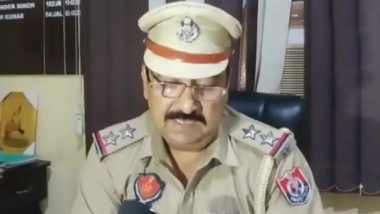 Jalandhar, October 28:  Mukesh Kumar, Sub-Inspector, Jalandhar Police said on Wednesday, that a  complaint has been filed against a video showing the burning of Lord Ram's effigy . He said, " We received a complaint from Advocate Ashok Sarin against a viral video of Lord Ram's effigy being burned. We have lodged a complaint at Jalandhar police station in this regard & we will take further action based on the investigation." PB-FARM-YOUTH CONG Farm Bills: Punjab Youth Cong to Burn Modi's Effigy on Dussehra.

A video purportedly showing effigy of Lord Ram being burnt is reportedly going viral on social media in Punjab. Advocate Ashok Sarin filed an complaint regarding the same at the Jalandhar police station. The police said that an investigation has been launched in this regard. Dussehra 2020: Along With Ravana, a COVID-19 Effigy to be Burnt in Punjab's Jagraon to Defeat The Pandemic.
The members of Bhartiya Kisan Union  (BKU) burned effigies of PM Narendra Modi  and business tycoons including Mukesh Ambani and Gautam Adani in several cities of Punjab on Dusshera. This was done as a part of protest against the new agricultre laws, the BKU claimed that the new laws are anti-farmers.

(The above story first appeared on LatestLY on Oct 28, 2020 03:56 PM IST. For more news and updates on politics, world, sports, entertainment and lifestyle, log on to our website latestly.com).