Jammu & Kashmir: No Curfew in Srinagar On August 4-5, Order Withdrawn by Govt Amid Criticism 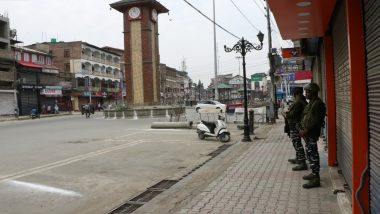 Srinagar, August 4: The Jammu & Kashmir administration on Tuesday rescinded the order to impose curfew in Srinagar on August 4-5. The withdrawal comes amid widespread criticism, with Opposition parties and activists questioning the government over the need to clampdown on civil liberties on the occasion marking first anniversary of Article 370 repeal.

While the order to impose curfew under Section 144 of CrPc - which bars assembly of four or more persons in public - other curbs aimed at containing COVID-19 spread would remain in effect in Srinagar and other parts of Jammu & Kashmir.

The order to impose curfew was issued on Monday, after the Intelligence received inputs of massive protests by "Pakistan-sponsored" separatist elements who want to observe a "black day" on August 5.

The Bharatiya Janata Party (BJP) is planning the "Ek Bharat, EK Atma Bharat campaign in J&K to mark the first anniversary of Article 370 repeal. The party would organise national anthem singing events and flag hoisting ceremonies at the panchayat level.

(The above story first appeared on LatestLY on Aug 04, 2020 09:32 PM IST. For more news and updates on politics, world, sports, entertainment and lifestyle, log on to our website latestly.com).