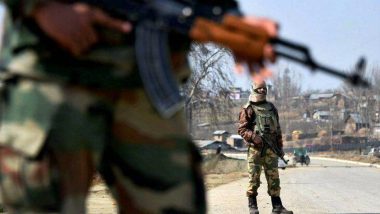 Jammu & Kashmir, August 6: In a shocking incident, terrorists shot dead a BJP sarpanch identified as Sajad Ahmad Khanday outside his residence in Vessu, Kulgam. According to an ANI update, he was first shifted to a hospital but later succumbed to his injuries on Thursday. More details on this news are awaited.

A day before the first anniversary of abrogation of Article 370 and 35-A on August 5, in similar incident militants on Tuesday evening shot at and critically injured a sarpanch affiliated with the BJP in South Kashmir's Kulgam district. He was identified as Arif Ahmad from Akhran Mir Bazar Kulgam. His condition was said to be critical after he received gunshot wounds in the neck. Article 370 Abrogation, 1 Year Ago: What Was Article 370 And What Happened in Jammu & Kashmir After It Was Removed?

#UPDATE Sarpanch Sajad Ahmad Khanday, who was fired upon by terrorists, succumbs to his injuries. #JammuAndKashmir https://t.co/HAHyAR3Zf2

Militants reportedly attacked Indian security forces with a grenade and gunfire in Kashmir on Wednesday, defying the strict security lockdown on the first anniversary of the government's scrapping Article 370.

(The above story first appeared on LatestLY on Aug 06, 2020 10:16 AM IST. For more news and updates on politics, world, sports, entertainment and lifestyle, log on to our website latestly.com).