Bihar Chief Minister Nitish Kumar on Sunday gave a clarion call for a "main front", comprising the Congress, to oust the BJP in 2024 parliamentary polls. 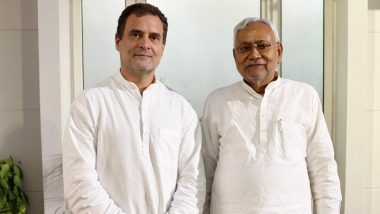 Fatehabad, September 25: Bihar Chief Minister Nitish Kumar on Sunday gave a clarion call for a "main front", comprising the Congress, to oust the BJP in 2024 parliamentary polls. He was among political regional bigwigs who took part in a rally to mark the 109th birth anniversary of former Deputy Prime Minister and tallest farmer leader Devi Lal in Haryana's Fatehabad.

RJD leader and Bihar Deputy Chief Minister Tejashwi Yadav and CPM's Sitaram Yechury also attended the rally to mark the birth anniversary of the INLD founder Devi Lal. At the rally, Nitish Kumar even called for the inclusion of the Congress as the main Opposition party. However, the rally organiser INLD and its ally SAD do not share cordial relations with the Congress. Mission 2024: Bihar CM Nitish Kumar Meets Congress Leader Rahul Gandhi in Delhi.

Nitish Kumar reiterated that he is not a Prime Minister candidate. "There is no question of a third front now and what is needed is the main front of opposition to ensure that BJP loses badly. I will urge all parties including the Congress to come together. My only wish is that we all need to come together at the national level. We need to bring together more parties."

Tejashwi Yadav said Kumar's "fearless" decision to part ways with the BJP would prove to be the last nail in the party's coffin. "Nitish Kumar had no vested interests, but his only ambition was to uproot the communal forces," he said.

Sukhbir Badal joined the call for like-minded parties to form a united front. He said his party, along with the Shiv Sena and the JD-U, "are the real NDA as they had founded the alliance".

Political observers told IANS that the INLD through this rally tried to project the beginning of formation of a third front to take on the BJP in the 2024 Lok Sabha polls.

However, INLD splinter group, the Jannayak Janata Party (JJP) headed by Devi Lal's great grandson Dushyant Chautala, is the Deputy Chief Minister in the Manohar Lal Khattar-led BJP government in the state. Dushyant Chautala was expelled from the INLD when party patriarch O.P. Chautala, his grandfather, chose his younger son Abhay Chautala as his political heir.

(The above story first appeared on LatestLY on Sep 25, 2022 08:04 PM IST. For more news and updates on politics, world, sports, entertainment and lifestyle, log on to our website latestly.com).