According to Brijesh Kanojia, Regional Meterological Center in Nagpur, 7 out of 11 stations in Vidarbha region in Maharashtra recorded heatwave conditions. Kanojia stated that Nagpur reported the maximum temperature with mercury touching 46.5 degrees Celsius on Sunday. 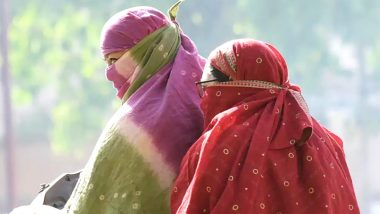 Apart from Nagpur, Akola recorded 46 degrees Celsius while some other areas in the state recorded temperatures above 40 degree Celsius. The MeT department has issued heatwave warning for coming 5 days in Vidarbha. Heatwave is declared when the maximum temperature is 45 degrees Celsius for two consecutive days. Severe heat wave is when the mercury touches the 47 degrees Celsius mark for two days together.

According to the  India Meteorological Department (IMD), the current weather condition is due to the the prevailing dry northwesterly winds over plains of northwest India & Central India. Due to this, parts of India will witness severe heatwave conditions during next 4 to 5 days with peak intensity on May 25 & 26.

(The above story first appeared on LatestLY on May 24, 2020 05:17 PM IST. For more news and updates on politics, world, sports, entertainment and lifestyle, log on to our website latestly.com).