Mangoes From India With GI Tag Rule the World, 16 Varieties Exported to Bahrain; Know What Is a GT Tag and Speciality About GI-Tagged Mangoes

Recently, APEDA organized many virtual buyer-seller meets for the promotion of selected agricultural products. It also organized a mango festival in Berlin, Germany. It also played a pivotal role as the registered export under the Government of India. 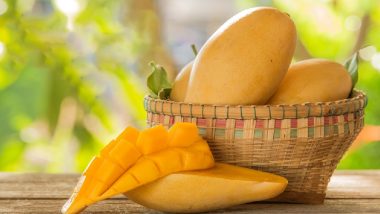 India has begun the export of sixteen varieties of mangoes, including three GI-certified varieties from India’s eastern region to Bahrain, starting from June 8. India is a net exporter of agricultural products worldwide with a high share of primary commodity exports like tea, rice, bovine meat, sugar, spices, etc.

What is a GI Tag?

Geographical Indication (GI) tag is proof of where the product is born or produced. This product can be natural, agricultural or manufactured. The use of GI, as an indication of the product's origin, acts as a certification that the product has exclusive qualities, is made/produced according to traditional methods, or has a good reputation due to its geographical origin.

India Houses 1500 Varieties of the ‘King of Fruit’:

Mango is rightly postulated as the ‘king of fruit’ for its distinctive taste and manifold health benefits. India houses about 1500 varieties of mango, each unique in its taste, color, and shape. These different species of mangoes are found in different corners of the country, mostly in the summer months starting from April to August.

Which are the 16 Varieties of Mangoes that Are Exported to Bahrain?

The 16 species of mangoes that are exported to Bahrain include three GI tagged varieties: Khirsapati, Lakshmanbhog from West Bengal, and Zardalu from Bihar.

What Is So Special About India’s GI-Tagged Mangoes?

Khaas-e-aam: It is astonishing how a fruit as special as mango can be called ‘aam’ . The fruit has the ability to bring a goofy smile to the face of people belonging to every age group. Its sweet-sour taste is irresistible for not just Indian, but foreign taste buds.

The Khirsapati aam, found abundantly in the eastern state of West Bengal and in parts of Bangladesh is highly popularised in India and abroad for its yellow-orange color and distinct taste.

It is widely considered as the ‘Champagne of mangoes’. Another specialty of this species is that it does not have any fiber. The medium-sized fruit weighs between 250-350 grams, with 77% pulp content. The variety has a good keeping quality. It is also known as Himsagar. GI Tag For Betel Leaf? Authoor Vattara Vetrilai Viyabarigal Sangam Seeks Geographical Indication Tag for Authoor Vetrilai.

This variety of mango is also exclusively cultivated in West Bengal. Known for its splendid taste and appearance, it is considered a viable alternative to the famous Alphanso mango.

The Zardalu aam received the GI tag on 28th March 2018 for its creamy texture, natural bright yellow colour and an enticing aroma. Though the variety is the specialty of Bhagalpur and adjoining districts of Bihar, it is also found in Chennai.

As per legend, the Bhagalpuri Zardalu mango was cultivated for the first time in this region by Maharaja Rahmat Ali Khan Bahadur of Khadakpur.

What Is APEDA & How It Contributes to Promoting Mango Exports in South Korea & Germany?

The Agricultural & Processed Food Products Export Development Authority (APEDA) was established by the Government of India in December 1985 for the export promotion and development of selected agricultural products.

Recently, APEDA organized many virtual buyer-seller meets for the promotion of selected agricultural products. It also organized a mango festival in Berlin, Germany. It also played a pivotal role as the registered export under the Government of India.

Further, with the efforts of APEDA and IFFCO, 66 MTs of mangoes are to be supplied to South Korea in this season.

Mango is a blessing upon humanity, and indeed, India’s treasured gift to the entire world. It is inextricably tied to India, as the olive tree is tied to Greece or the grapevine to Italy. Mango has been a pivotal part of India’s rich history, culture, diet, and life for at least the last 4,000 years. Sixteen Varieties Of Mangoes Exported To Bahrain From West Bengal And Bihar.

As per legend, it is known to have delighted Alexander the Great in 326 BC. Also, one of India’s most celebrated Mughal emperors, Akbar, is said to have had an orchard with 100,000 mango trees. In the words of the legendary Urdu poet, Mirza Ghalib, in the praise of mangoes, “even the sweetest of sugar canes is bland beside it.”

The leaves of mango are used to sprinkle sacred water in Hindu rituals. The mango tree is rightly called the Kalpavriksha, or the ‘wish-granting tree,’ in our ancient texts.

(The above story first appeared on LatestLY on Jun 09, 2021 06:41 PM IST. For more news and updates on politics, world, sports, entertainment and lifestyle, log on to our website latestly.com).