A 35-year-old driver of a pick-up van was mercilessly beaten up by cow vigilantes in Raal village over suspicion of 'ferrying beef and smuggling cattle' in his vehicle. 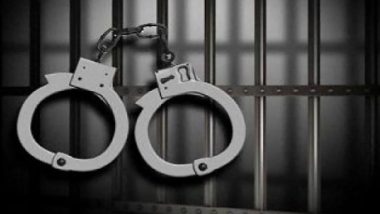 Mathura, March 22: A 35-year-old driver of a pick-up van was mercilessly beaten up by cow vigilantes in Raal village over suspicion of 'ferrying beef and smuggling cattle' in his vehicle.

Several purported videos of the driver, identified as Mohammad Aamir, being thrashed by 2-3 men with belts while his shirt had been ripped off, surfaced on social media on Monday night.

The man is seen begging them to stop, but they show no mercy. They were also abusive.

SP (City) M.P. Singh said that the van, which was heading to Sikandrarao in Hathras from Mathura's Govardhan, was intercepted by local residents and cow vigilantes from a right-wing outfit in Raal village.  Hindu Residents Threatened by Mob of Muslims To Sell Their Flats in Bhavnagar? Here’s a Fact Check of the Fake News Going Viral

However, during the preliminary investigation, nothing, except some animal carcasses for which Aamir had a licence, was found in the van, Singh said.

The suspects allegedly held the driver hostage and beat him up brutally, he added.   Uttar Pradesh: Members In Wedding Procession Beaten Up For Playing Election Songs Related To PM Modi and CM Yogi Adityanath in Aurraiya

Two other men were also beaten up by the public over suspicion of their links with the van driver, said the SP, adding that they rescued all the three men from the mob and sent them for medical treatment.

According to doctors, Aamir had received bruises on his face and shoulder. "He did not suffer any major injuries," doctors said.

The SP (City) further said that two FIRs have been registered in the matter at Jait police station. One was lodged on a complaint filed by Aamir while the other was given by Vikas Sharma, convenor of Gau Raksha Vibhag of Vishwa Hindu Parishad (VHP).

Police said that 16 identified people, including Vikash Sharma and Balram Thakur from VHP, and some unidentified persons have been booked under relevant IPC sections, including 307 (attempt to murder), on a complaint filed by Aamir.

In the FIR, Aamir stated that "Sharma and Thakur intercepted his vehicle in Raal village and after knowing that animal carcasses were being taken to Hathras, they began thrashing him badly."

Meanwhile, Sharma, in his complaint, accused local residents of Raal village of beating him up along with his associate Balram Thakur, who is secretary of the committee, over suspicion of their involvement with Aamir.

Several attempts to contact Aamir's family members proved futile as their numbers were switched off.

(The above story first appeared on LatestLY on Mar 22, 2022 08:30 AM IST. For more news and updates on politics, world, sports, entertainment and lifestyle, log on to our website latestly.com).