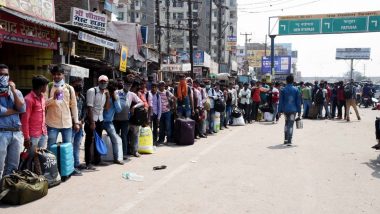 New Delhi, May 28: The Supreme Court on Thursday passed a slew of interim orders to the Centre, state governments and the Railways to ensure food and transportation facilities for migrants workers who are stranded in different parts of the country due to the lockdown. A bench comprising Justices Ashok Bhushan, SK Kaul and MR Shah said stranded migrant labourers shouldn't be charged for transportation. UP, Bihar Account For 80% of Migrants, Over 91 Lakh Shifted Back to Native States Since May 1: Centre Tells Supreme Court.

"No fare either by train or bus shall be charged for migrant workers. Railway fare to be shared by states," the top court said. Putting the onus of providing food to stranded migrants on concerned state governments, the apex court further asked states to oversee the registration of migrants and ensure that after registration, they are made to board transport services as early as possible. Rahul Gandhi Shares Short Film Depicting Plight of Migrant Workers During Lockdown on His YouTube Channel, Watch Here.

"Migrant workers who are stranded, shall be provided food by the concerned state at places which shall be publicised and notified for the period that they are waiting for their turn," the three-judge bench said. "We are concerned with the difficulties of migrants trying to get to their native place. There are several lapses that we have noticed in the process of registration, transportation and provision of food and water to them," the top court observed.

The bench also asked the Ministry of Railways to ensure migrants on the move get food and water in the train. Food and water to also be provided in buses, it added.

The apex court told the Centre to ensure migrants on the move get food, water and basic amenities before they reach home. The apex court noted that in relief camps migrants may be getting food, but those in rented premises are suffering due to the lockdown.

(The above story first appeared on LatestLY on May 28, 2020 04:12 PM IST. For more news and updates on politics, world, sports, entertainment and lifestyle, log on to our website latestly.com).