Minimum Legal Age for Marriage of Women Likely to be Increased to 21 from 18 as Union Cabinet Clears Proposal: Reports 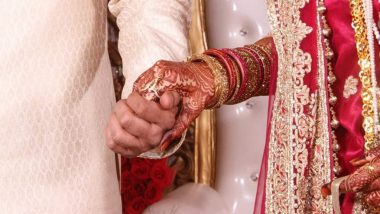 New Delhi, December 16: The Union Cabinet on Wednesday passed a proposal to increase the minimum legal age for marriage for women in the country to 21 years, according to sources. The minimum legal marriage age for women in India is 18 years currently. However, a report by NDTV quoting sources said that the cabinet has cleared the proposal to increase the age to 21 years. Notably, the legal age for marriage for men in the country is 21 years as well.

A NITI Aayog Task Force had submitted a proposal in December last year recommending the increase in the minimum legal age for marriage for women in the country. It was head by Jaya Jaitly. She said that the recommendation came “after extensive consultations with experts, and more importantly with young adults, especially young women as the decision affects them directly," as reported by the Indian Express. Rajasthan: Married at 7, This 'Balika Vadhu' Got Freedom After 12 Years.

(The above story first appeared on LatestLY on Dec 16, 2021 10:56 AM IST. For more news and updates on politics, world, sports, entertainment and lifestyle, log on to our website latestly.com).