The Mumbai Police Traffic Control has received a message purportedly warning of another terror attack in the country's commercial capital, officials said here on Saturday. 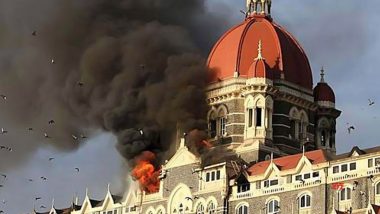 The threats were in a WhatsApp message, ostensibly from a neighbourhood nation, though details of the sender or when the strikes will take place were not clear. Rajasthan Road Accident: 5 Killed, Over 25 Injured As Tractor Rams Into Truck in Pali.

The message also claims that the next strike would revive the memories of the 26/11 terror attacks in the city by heavily armed 10 Pakistani extremists.

The latest threats comes two days after the state suffered a major security scare when a yacht with 3 AK-47 guns and ammunition drifted to the Raigad coast and was stuck at Harihareshwar Beach.

Though a potential terror threat was ruled out, a detailed investigation is being carried out by the ATS and Raigad Police.

(The above story first appeared on LatestLY on Aug 20, 2022 10:16 AM IST. For more news and updates on politics, world, sports, entertainment and lifestyle, log on to our website latestly.com).