Mumbai Couple Held in Qatar for Drugs, NCB to Take Diplomatic Route to Bring Back Couple Jailed in Doha for Smuggling Drugs ‘Unintentionally’

The couple, Mohammad Shareeq and Oniba Kauser Shakeel Ahmed, was arrested at the Hamad International Airport in Doha by the drug enforcement agencies with 4.1 kg of hashish (charas) in their baggage on July 6 last year. 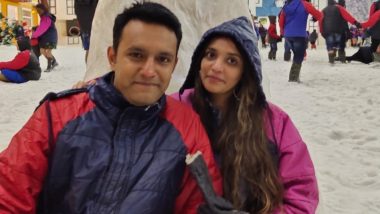 New Delhi, October 24: The Narcotics Control Bureau (NCB) will take the diplomatic route to bring back a Muslim couple from Qatar, who were arrested there on charges of smuggling drugs after it was found that they "unitnetionally" carried the drugs in their baggage, which were put there by their relative in the garb of tobacco or 'zarda'. The relative had provided the couple with a honeymoon package.

The couple, Mohammad Shareeq and Oniba Kauser Shakeel Ahmed, was arrested at the Hamad International Airport in Doha by the drug enforcement agencies with 4.1 kg of hashish (charas) in their baggage on July 6 last year.

Following the seizure of drugs in their baggage, the couple was sentenced to 10 years in jail and a fine of 300,000 riyal was slapped on each of them.

An NCB official requesting anonymity told IANS, "The case came to our notice after Shakeel Ahmed Qureshi, Oniba's father, approached the NCB alleging that his daughter and son-in-law were arrested for transporting contraband from India to Qatar and were subjected to life imprisonment there."

The official said that in his letter to the NCB Director, Qureshi had alleged that her daughter and son-in-law were deceived by a lady namely Tabassum Riyaz Qureshi, who is the aunt of Shareeq, and her associate Nizam Kara in the garb of "honeymoon package".

He said the contraband was concealed in their luggage by Tabussum and Kara, both residents of Mumbai.

The official said that Qureshi had provided the relevant documents and a compact disc containing audio recordings of the conversations between his son-in-law and Tabussum, along with the complaint.

The official said that after the complaint was received by the NCB, a detailed enquiry was initiated by the drug-law enforcement agency into the allegations levelled by Qureshi. It was learnt that a "well-organised drug trafficking syndicate" was being run by Kara involving Tabussum and others.

The official said that a close surveillance was mounted against the drug syndicate members by the NCB.

The official said that on December 22 last year, the Mumbai Police had registered a case and during investigation, Kara and Tabuassam were arrested with 13 gm of cocaine.

The official further said that based on some reliable input, the NCB team on February 26 intercepted one consignment of the 1.474 kg of charas belonging to this syndicate in Chandigarh and arrested four persons -- Ved Ram, Maheshwar, Shahnawaz Gulam Choratwala and Shabbana.

The official said that during investigation, it surfaced that at the behest of Kara and his wife Shaheeda Kara, this consignment was procured by Choratwala and Shabbana.

The NCB claimed that all the financial arrangements for this consignment were made by Shaheeda Kara on the directions of her husband.

However, on July 7, Kara was granted bail in the Mumbai case and after coming out of jail he changed his residence.

"We got a breakthrough on October 14 when the couple was found. During questioning, Kara admitted that Shareeq and Oniba were sent to Qatar by him and his associate Tabussum," the official said.

"Shareeq and Oniba were handed over the luggage that purportedly contained 'zarda' or tobacco. But instead of 'zarda', charas was concealed in their luggage," the official said.

"We are contacting the concerned authorities to raise the issue at the diplomatic level," the official added.

IANS tried to contact the family members of Oniba, but her brother refused to comment on the matter.

(The above story first appeared on LatestLY on Oct 24, 2020 06:50 PM IST. For more news and updates on politics, world, sports, entertainment and lifestyle, log on to our website latestly.com).