Mumbai: Man Abuses, Spits on Cop After He Stops Him From Kissing Woman At Vasai Railway Station

According to the police, the incident took place around 10.30 pm on platform No. 3 of Vasai Railway station. The 32-year-old constable, who was on night duty, spotted the accused, identified as Kuldeep Tiwari of Nalasopara (east), with a woman. 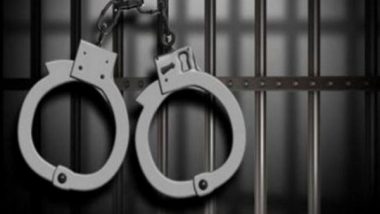 Mumbai, April 21: Complaint has been filed against a 27-year-old man for allegedly manhandling and spitting on a police constable who confronted him for kissing and hugging a woman at the Vasai railway station premises Tuesday night, said the police.

According to the Indian Express, the incident took place around 10.30 pm on platform No. 3. The 32-year-old constable, who was on night duty, spotted the accused, identified as Kuldeep Tiwari of Nalasopara (east), with a woman.  Madhya Pradesh Shocker: 32-Year-Old Woman Raped for 10 Months on Marriage Lure in Bhopal

The constable said in his complaint: “He was hugging and kissing a woman and doing obscene acts at a public place. I told him not to do obscenity at a public place and asked him to leave from there. He abused and threatened me and spat on my face twice and caught my collar.”  Online Fraud in Mumbai: 26-Year-Old Man Duped of Rs 3 Lakh by Cyber Fraudster Pretending to be Police Officer

A first information report (FIR) was registered under sections 353, 186, 504, 506, 332 and 323 of the Indian Penal Code (IPC) for assaulting, abusing, threatening an on-duty public servant and obstructing him from discharging his duties. The accused has not been arrested yet, said the police.

(The above story first appeared on LatestLY on Apr 21, 2022 04:44 PM IST. For more news and updates on politics, world, sports, entertainment and lifestyle, log on to our website latestly.com).