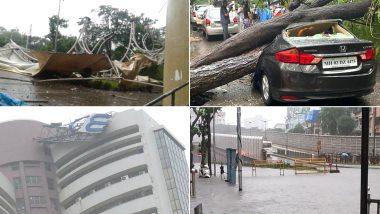 Similarly, Western Railway spokesperson Sumit Thakur said that owing to heavy rains, some suburban trains were suspended and all trains were reversed from Mumbai Central, Dadar, Bandra and Andheri.

Major landmarks like the Bombay Stock Exchange's (BSE) Phiroze Jeejeebhoy Tower suffered the brunt of the rain fury when its massive signboard on the 29th floor got ripped off and hung precariously.

Some sections of a cement cladding adorning the exteriors of the Jaslok Hospital in south Mumbai were blown off and fell in pieces on the road below, but there were no reports of any casualties.

In some areas, water rushed into ground-floor homes, shops or offices in south Mumbai as incessant rains continued all day.

The #IMD (@Indiametdept) has forecast heavy to extremely heavy spells of rain in #Mumbai and the coastal Konkan area in the next 24 hours.#MumbaiRains pic.twitter.com/ACXLe8CdWU

With thousands of commuters getting stranded, the BrihanMumbai Municipal Corporation (BMC) on Wednesday evening said that it had made arrangements for people at the nearest civic schools outside the major railway stations.

Heavy rains also lashed the adjoining coastal districts of Thane, Palghar, Raigad, Ratnagiri and Sindhudurg since the past 24 hours.

The IMD has forecast heavy to extremely heavy spells of rain in Mumbai and the coastal Konkan area in the next 24 hours.

(The above story first appeared on LatestLY on Aug 05, 2020 10:31 PM IST. For more news and updates on politics, world, sports, entertainment and lifestyle, log on to our website latestly.com).