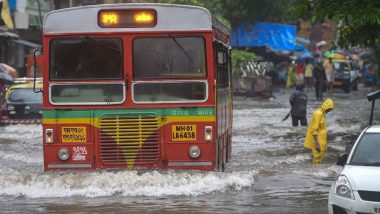 Mumbai, July 27: Heavy rains lashed the financial capital and it caused massive waterlogging in several parts on Monday morning. This caused inconvenience to people who were out of the streets heading to their respective places of work. According to a view shared by ANI, there were severe waterlogging in Dadar and other parts of the city.

According to reports, Maharashtra is predicted to be largely rainfall-free on July 28. There is also a forecast of very heavy to heavy rainfall lashing most parts in North and North-East India. Uttarakhand, Uttar Pradesh, Sub-Himalayan West Bengal, Sikkim, Arunachal Pradesh and Assam, Meghalaya on Tuesday. Mumbai received almost 100 percent of its July rainfall in the first 14 days of the month.

(The above story first appeared on LatestLY on Jul 27, 2020 08:22 AM IST. For more news and updates on politics, world, sports, entertainment and lifestyle, log on to our website latestly.com).