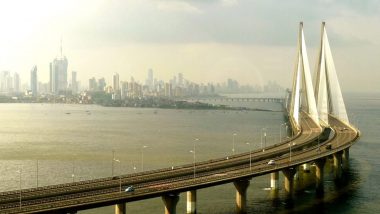 Mumbai, June 4: The city witnessed its cleanest air on Wednesday as Cyclone Nisarga made its landfall near Raigad in Maharashtra. The cyclone brought high-speed winds and washed away pollution in the air. The air quality index (AQI) was recorded at 22, falling under the “good” category and the lowest for the year said the System of Air Quality Weather Forecasting And Research (SAFAR).

Mazgaon recorded the cleanest air in the city with an AQI of four. On the other hand, places like Malad and Borivli on the Western line recorded an AQI of 43, which were the highest. All 10 locations recorded “good” AQI values. Mumbai woke up to cloudy skies and heavy rainfall on Thursday. Mumbai Rains: City Wakes Up to Heavy Rains And Gusty Winds, IMD Predicts Overcast Skies And Light Showers Over The Next 48 Hours.

The Indian Meteorological Department (IMD) predicted generally cloudy skies and the possibility of light rains over the next 48 hours. The Mumbai rains have caused waterlogging in several places, including Sion, Dadar and Parel. Mumbai was infact on red alert on June 3 in view of cyclone Nisarga, but barring a few places, the city mostly experienced drizzling and moderate rainfall.

(The above story first appeared on LatestLY on Jun 04, 2020 03:25 PM IST. For more news and updates on politics, world, sports, entertainment and lifestyle, log on to our website latestly.com).