In a tragic incident, three workers were reported to be trapped after a building collapsed at Masjid Bunder area of Mumbai on Thursday. The workers were involved in the demolition of Sayyad Building of the area. Two workers have been rescued from the debris of the building 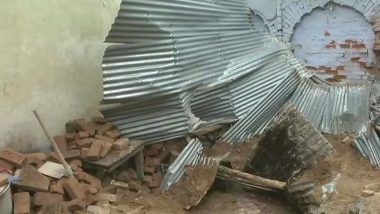 Mumbai, August 9: A labourer was killed after a portion of a building collapsed at Masjid Bunder area of Mumbai on Thursday.  According to reports, four workers were involved in the demolition of Sayyad Building when the portion of the structure came down crashing. After the incident, authorities immediately reached the spot and started the rescue operation. Dongri Building Collapse: Mumbai Police Register Case Against 3 People.

Tree workers were also rescued from the debris of the building. More details are still awaited. The incident took place at a time when heavy rains lashed the city. It is the second building collapse reported form Mumbai in the last one month. Mumbai Building Collapse: 4 Dead, 8 Injured After Building Collapses in Dongri, PM Narendra Modi Condoles Deaths.

Earlier in July, around 14 people lost their lives in the collapse of four-storeyed Kesarbhai building in the city's Dongri area. The Maharashtra Housing and Area Development Authority (MHADA) also said the 'Kesarbai' building, which collapsed, was supposed to have been demolished in 2012. MHADA chairman Uday Samant blamed the builder for not carrying out the redevelopment work.

(The above story first appeared on LatestLY on Aug 09, 2019 06:11 PM IST. For more news and updates on politics, world, sports, entertainment and lifestyle, log on to our website latestly.com).