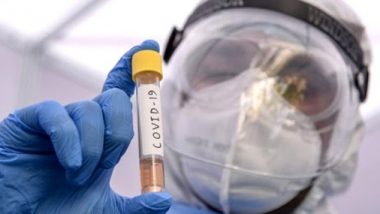 Mumbai, July 28: Around 57 percent of slum residents, who were tested in a recent sero survey in Mumbai were found to be exposed to coronavirus. In comparison, only 16 percent of residents staying in housing societies were exposed to the lethal virus. What is a Serological Survey? How is it Carried Out? Here's Everything You Need to Know.

Respondents of the survey who were found exposed to the virus causing have developed antibodies, the report prepared following the sero survey confirmed. This is likely to boost their immunity and prevent them from a COVID-19 infection.

The survey was conducted by the Brihanmumbai Municipal Corporation (BMC), in coordination with the Tata Institute of Fundamental Research and the Niti Aayog. A total of 8,870 people were targeted for the survey.

The antibody tests were, eventually, conducted on 6,936 peoples residing in the three areas of Chembur, Matunga and Dahisar. Among those selected for the survey included an equal number of men and women.

The respondents selected from housing societies and slums were also equally divided. The sample selected for study included children as young as 10-year-old to senior citizens above the age of 60.

The high exposure of COVID-19 among slum residents is being credited to usage of common toilets, high population density and lack of social distancing.

"Taking together the current prevalence and records from BMC on reported deaths, the infection fatality rate is likely to be very low (0.05-0.10%). Among others, this could be attributed to effective containment efforts and active measures to isolate symptomatic cases by the BMC," the reported was quoted as saying.

Maharashtra, with close to four lakh COVID-19 cases, accounts for nearly one-fourth of the nationwide tally. As per the update issued on Tuesday, the state's overall count reached to 3,91,440 with 7,717 new cases. Mumbai, however, recorded its lowest spike in the last three months with 700 positive cases.

(The above story first appeared on LatestLY on Jul 28, 2020 11:37 PM IST. For more news and updates on politics, world, sports, entertainment and lifestyle, log on to our website latestly.com).