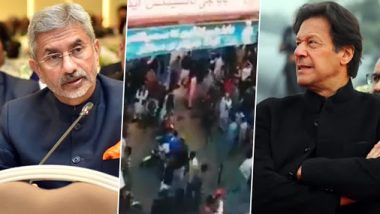 New Delhi/Islamabad, January 3: The Union Ministry of External Affairs of Friday expressed its concern over the stone pelting issue at Nankana Sahib Gurdwara and asked Pakistan Premier Imran Khan to intervene. The MEA also asked the Pakistan administration to to take immediate steps to ensure the safety, security, and welfare of the members of the Sikh community.

Expressing its concern, MEA said, "We are concerned at the vandalism carried out at the revered Nankana Sahib Gurdwara (in Pakistan) today. Members of the minority Sikh community have been subjected to acts of violence in the holy city of Nankana Sahib, the birthplace of Shri Guru Nanak Dev ji." Nankana Sahib Stone Pelting: Captain Amarinder Singh Writes to Pak PM Imran Khan, Appeals to Save Historic Gurdwara and Rescue Devotees.

Adding more, it said, "India strongly condemns these wanton acts of destruction and desecration of the holy place. We call upon the Government of Pakistan to take immediate steps to ensure the safety, security, and welfare of the members of the Sikh community." Asking the Pakistan government to take strong action against the miscreants, the Indian external affairs ministry called upon Khan government to protect and preserve sanctity of the holy Nankana Sahib Gurdwara.

Apart from this, MEA also reminded Pakistan the case of forcible abduction and conversion of Jagjit Kaur, the Sikh girl who was kidnapped from her home in the city of Nankana Sahib in August last year. It is to be known that MEA's comments come minutes after Punjab Chief Minister Captain Amarinder Singh appealed to Pakistani Premier to intervene and rescue the stranded devotees and save the historic Gurdwara.

Appeal to @ImranKhanPTI to immediately intervene to ensure that the devotees stranded in Gurdwara Nankana Sahib are rescued and the historic Gurdwara is saved from the angry mob surrounding it.https://t.co/Cpmfn1T8ss

Earlier, reports arrived that residents of Nankana Sahib pelted stones on Gurdwara Nankana Sahib and surrounded the gurdwara at around 7 pm on Friday. The mob -- led by led by the family of Mohammad Hassan who accused in abducting and converting Sikh girl Jagjit Kaur -- were threatening to destroy it. They were even claiming the change the name of place from Nankana Sahib to Ghulaman-e-Mustafa. Stone Pelting at Gurdwara Nankana Sahib in Pakistan, Mob Threatens to Destroy it; Watch Video.

As per the local reports, Pakistan Rangers personnel took the charge and have started arresting the protesters to quell the situation. It is to be known that Gurdwara Nankana Sahib is considered to be a highly revered gurdwara which was built at the site where the founder of Sikhism, Guru Nanak, was believed to be born in 1469.

(The above story first appeared on LatestLY on Jan 03, 2020 09:26 PM IST. For more news and updates on politics, world, sports, entertainment and lifestyle, log on to our website latestly.com).