Maria Zakharova said that the two nations will lose the opportunity to act as "conveyors of many constructive, unifying initiatives" as they did in the past. 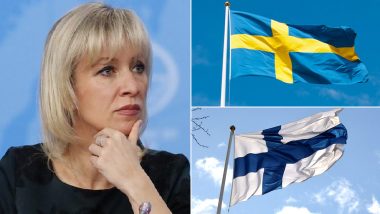 Moscow, April 15: Sweden and Finland will lose part of their sovereignty while compromising their security if they join NATO, the Russian Foreign Ministry warned on Friday, referring to the two nations expected requests for formal membership in the US-led military bloc.

Sweden and Finland have long been close to the organisation but have maintained formal non-alignment with NATO since the Cold War. Both may soon apply for membership amid the ongoing security crisis in Ukraine.

The Russian Foreign Ministry has warned that Sweden and Finland would not gain anything by moving forward with the plan, RT reported. Russia Claims Ukrainian Helicopters Carried Out Strikes On Its Territory.

She said the two nations will lose the opportunity to act as "conveyors of many constructive, unifying initiatives" as they did in the past.

"Naturally, the choice belongs to the authorities of Sweden and Finland. But they should realise the consequences of such a move to our bilateral relations and the European security architecture, which currently is in a state of crisis," she added.

The official argued that the two nations would become platforms used by NATO to threaten Russia and that neither they, nor the region of northern Europe as a whole, would benefit from it.

She added that NATO membership "implies de facto surrender of a part of sovereignty in making decisions on defence, and also on foreign policy".

Dmitry Medvedev, the former Russian President and Prime Minister, who is currently the Deputy Chairman of the country's Security Council, had implied earlier this week that if the two nations joined the trans-Atlantic bloc, Russia would deploy nuclear weapons in the Baltic region.

(The above story first appeared on LatestLY on Apr 15, 2022 10:59 PM IST. For more news and updates on politics, world, sports, entertainment and lifestyle, log on to our website latestly.com).