Navratri 2020 Celebrations: No Garba in Gujarat This Year Due to COVID-19 Pandemic

At prayer gatherings, COVID-19-related norms such as social distancing, covering of face with masks and use of sanitisers will be mandatory, the release said. The government said citizens above 65, children below 10 years, pregnant women and people with comorbidities should avoid participating in any public programme during the festivals. 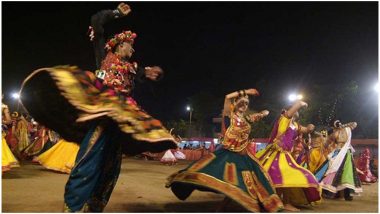 Ahmedabad, October 9: The pomp and grandeur associated with Navratri in Gujarat will be largely missing this year as the state government on Friday banned organisation of any 'garba' event during the upcoming festival due to the coronavirus pandemic.

The government said it will not allow any type of garba event in the state during Navratri, starting from October 17, and also released a set of guidelines for the festive season, which usually sees large gatherings, a fertile ground for COVID-19 spread.

For the upcoming festivals, the BJP government released standard operating procedures (SOPs) which stress on COVID-19-appropriate behaviour by citizens to curb the infection. No big, medium or small scale garba event will be allowed in the state during the nine-day festival, the government said. Navratri 2020: From Shailputri to Siddhidatri, Significance of Nine Forms of Maa Durga and Holy Mantras to Seek Blessings & Good Luck.

Garba is a popular folk dance of Gujarat and is performed with passion and fervour during the Navratri festival. The government, however, will allow collective prayers to Goddess Durga where number of people should not be more than 200, it said in a release.

The time limit of prayers will beof one hour, but nobody can perform garba at such gatherings, it said. Prior permission of government authorities has been made mandatory for organisation of community prayer programmes during Navratri.

At prayer gatherings, COVID-19-related norms such as social distancing, covering of face with masks and use of sanitisers will be mandatory, the release said. The government said citizens above 65, children below 10 years, pregnant women and people with comorbidities should avoid participating in any public programme during the festivals.

Navratri is one of the most popular festivals of Gujarat and is called the longest dance festival of the world. Revellers dance to the tune of traditional music and songs for nine nights. The government said event such as burning of effigies of Ravana, Ramlila yatras, rallies, melas (congregations), exhibitions would not be allowed during the festive season (from Navratri to Diwali). Durga Puja 2020 Calendar for Five-Day Festival: When Is Durga Ashtami? Check Full Dates and Day-Wise Pujo Chart to Worship Maa Durga.

It advised people to celebrate festivals like Dussehra, Durga puja, Diwali, Gujarati New Year, Bhai dooj and Sharad Poornima at their homes with their families. In the SOPs, the government said up to 100 people can attend functions such as marriage and the same number will be allowed at funerals.

During any event, the organisers will have to do floor marking with minimum distance of 6 feet, it said. Thermal scanners are compulsory at Navratri community prayers and other events, the release said.