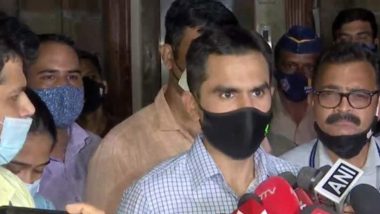 New Delhi, November 1: Amid the allegations of forged caste documents, the Narcotics Control Bureau (NCB) Mumbai Zonal Director Sameer Wankhede on Monday presented his caste certificates to the National Commission for Scheduled Castes (NCSC) here in Delhi. He arrived from Mumbai this morning and submitted his caste certificate and other related documents to the Commission and made a statement. The SC Commission Member Subhas Ramnath said that Wankhede presented his all documents before the full bench of the Commission and made his stand clear on the entire issue. "After hearing Samir Wankhede, the Commission will scrutinise all his documents and will take a view on his statement before pronouncing its order", Ramnath said.

Maharashtra Cabinet Minister Nawab Malik on October 25 had accused Sameer Wankhede of using forged documents to get into the government job and demanded that action be taken against him. Continuing his tirade against him, Malik even shared his date of the birth certificate on social media which categorised him as a Muslim and claimed that he allegedly corrected his father's name to become an India Revenue Service officer which was unfair to a genuine Dalit candidate appearing for the Union Public Service Examination.  Sameer Wankhede Family Followed Islam, His Father's Name is Dawood, Says NCB Officer's Ex-Father-in-law Dr Zaheed Qureshi.

On Sunday, the NCSC Vice-Chairman Arun Haldar met Wankhede's family members in Mumbai and said that an officer of all India service cannot give a forged certificate to procure a government job. He also said that he saw his birth certificate which appeared to him as genuine. Haldar also said that he was aware of how a section of leaders has been trying to defame Wankhede. He added that NCSC is here to safeguard the interest of a Scheduled Caste family. Wankhede's wife and father on Sunday also met Union Minister of State for Social, Justice, and Empowerment Ramdas Athawale and sought support on this issue. Athawale assured them on behalf of his party RPI and said that he would ask Nawab Malik to stop conspiring against Wankhede.

(The above story first appeared on LatestLY on Nov 01, 2021 02:05 PM IST. For more news and updates on politics, world, sports, entertainment and lifestyle, log on to our website latestly.com).