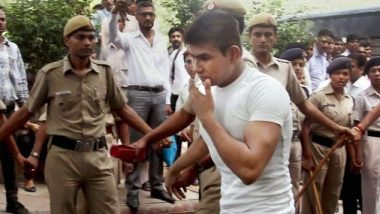 Delhi, February 20: One of the death row convicts Vinay Sharma filed a petition before the Election Commission to challenge the rejection of his mercy petition. It is his latest tactics to create a roadblock in the process of the hanging of all the convicts in the 2012 Nirbhaya gangrape and murder case. According to an India Today report, Sharma's lawyer AP Singh said that the mercy petition was rejected at a time when the Model Code of Conduct was in place in the national capital during Delhi Assembly Elections 2020, thus making minister Manish Sisodia ineligible to reject the petition.

The lawyer further argued that the digital signature of Manish Sisodia was needed and a screenshot received through WhatsApp was used to reject the mercy petition. The lawyer said, "I want that the pride of the EC, President, Supreme Court and Home Ministry shouldn't be destroyed in this way." Nirbhaya Case: Convict Vinay Sharma On Hunger Strike in Tihar Jail After Exhausting All Legal Options.

Sharma even went to the extent where he tried to injure himself and he reportedly banged his head against the wall of his cell at Tihar jail in Delhi. Security personnel saw him and stopped him. He suffered minor injuries.

(The above story first appeared on LatestLY on Feb 20, 2020 02:46 PM IST. For more news and updates on politics, world, sports, entertainment and lifestyle, log on to our website latestly.com).