Not to Miss: Rakesh C Wadhwa, The Virtuoso Bodybuilder Shares Some Exceptional Do's and Dont's for Bodybuilders

Bodybuilding is indeed a very challenging sport where not only an individual's body is put to test but also how his brain functions. With their bodies athletes also have to train their minds to sustain the pressure that develops months before the day of actual competition. 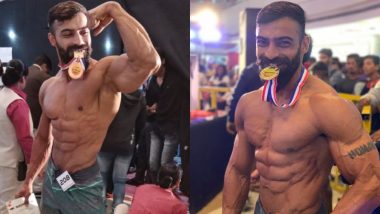 Bodybuilding is indeed a very challenging sport where not only an individual's body is put to test but also how his brain functions. With their bodies athletes also have to train their minds to sustain the pressure that develops months before the day of actual competition.

Rakesh C Wadhwa, one of India's finest and most appealing vegetarian bodybuilders lists down the most important but rarely talked about points that all athletes should keep in mind to stay upbeat during competition and to avoid any health hazard. The renowned fitness stalwart is also referred to as Rakesh Wadhwa.

Why do you think is the most important step before hitting the stage?

Not having a heavy meal, instead having small meals throughout the day is very important, because before going to the stage one needs to pump their body and if there is food in the gut then you look bloated.

Many newbie bodybuilders start cutting water 3-4 days prior to the competition which can lead to cramping, renal failure, cardiac arrest, organ failure etc, water should be reduced either one day in advance or even lesser depending upon the condition of the body.

Some may even cut down less as their body might not be holding much water beneath the skin.

What will be your top Do's for bodybuilders?

Several newcomer bodybuilders are unaware of the consequences of preparing in a certain way which they think is helping them but it's actually taking them closer to falling on the stage, athletes have to train over months to get their body into a perfect shape, to make that happen athletes begin by reducing their body fat percentage which can ideally be around to 3-8%, therefore both food and water should be cut down gradually.

Also, Flexing on the stage requires a lot of pressure and there is a need to pose multiple times which might cause blackout, if you avoid sipping water, then you have chances of falling on the stage, hence it is always better to raise your hand to drink water, your health should be kept first to survive through any competition.

Another thing that is quite common is muscle cramping, athletes tend to get cramps while posing, many amateurs tend to panic because of this, athletes can relax the muscle that has got a cramp by deep breathing and not panicking.

Do you have any on the stage Pro tip for bodybuilders?

Always smile on the stage, if you don't smile, you look under confident and stressed, smiling gives a good impression to the judges and audience as well, so even if your body lacks 5-10% outer work but you are smiling then it mostly does the cover up.

Don't eat a lot of food after you get down from the stage, since it's your brain that's hungry for all the food that you have been avoiding, so even if your stomach is full, you might still keep eating which can choke you up.

Just like food, avoid gulping large amounts of water in one go after you have gotten down from the stage, it's better to sip water slowly since half a litre water in one go or more can damage your kidneys since you have been on a water deficit since the last 24 hours or less, so it's always advisable to sip electral powder which can also help in replacing the electrolyte levels in your body.