Nude Woman Makes Video Call to Ahmedabad Man, Extorts Rs 66,000 From Him After Recording Their Call

The victim filed a complaint with the police on Thursday alleging that he was extorted by an unknown woman who recorded a video call between them. The report informs that the woman exposed herself on the video call and was reportedly nude. 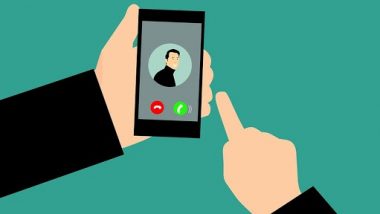 Ahmedabad, July 24: Another case of 'sextortion' has come to light from Gujarat's Ahmedabad where a man was extorted nearly Rs 66,000 by an unknown woman. Reports inform that the victim of the online scam is a 32-year-old man from the Nava Vadaj area of Ahmedabad. According to a report by TOI, the victim filed a complaint with police on Thursday alleging that he was extorted by an unknown woman who recorded a video call between them. The report informs that the woman exposed herself on the video call and was reportedly nude.

According to the TOI report, the victim stated in his complainant with Vadaj police that the incident took place when he was sitting in an autorickshaw when an unknown woman made a video call. The man said the video call was made on May 31 and the woman was nude in the video call. The report adds that the woman sent the video to him in which he was seen in another window watching the nude woman. WhatsApp Sex Chat Extortion Racket Alert: IPS Dr Muktesh Chander Urges People Not to Accept Video Calls from Strangers, Nude Girl Can Be a Blackmailer!

Soon after, the unidentified woman called him up and demanded money from him. The woman first sought Rs 10,000 for not circulating the video on social media. She kept calling and harassing him and also threatened him to post the video on social media websites. The woman allegedly took nearly Rs 50,000 with such threats. After the man had made a payment of around Rs 66,000, the woman demanded more money from him and kept threatening of dire consequences.

(The above story first appeared on LatestLY on Jul 24, 2021 11:04 AM IST. For more news and updates on politics, world, sports, entertainment and lifestyle, log on to our website latestly.com).