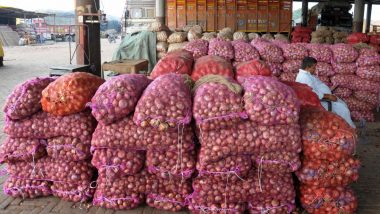 New Delhi, September 18: The central government has allowed export of onions laying at different ports of the country to other countries, including Bangladesh, according to multiple reports. Several trucks and containers filled with onions were stranded at ports following the government's ban on the export of the vegetable. "India allows export of onions lying on ports in transit to all countries including Bangladesh," sources were quoted as saying by news agency ANI. Onion Export Ban: Farmers in Nashik Unhappy Over Centre's Decision, Fear Decline in Wholesale Prices of Bulb.

According to news agency PTI, Directorate General of Foreign Trade (DGFT) has communicated to the Customs Department to give the go-ahead to onion-filled cargos that have arrived at the port, but not to ones which are in transit. The relaxation is given reportedly after Bangladesh formally complained to the Indian high commission through a note verbale or unsigned diplomatic correspondence against the ban on onions' export.

(The above story first appeared on LatestLY on Sep 18, 2020 11:27 PM IST. For more news and updates on politics, world, sports, entertainment and lifestyle, log on to our website latestly.com).