Patanjali's Coronil Gets Approval as Immunity Booster by AYUSH Ministry 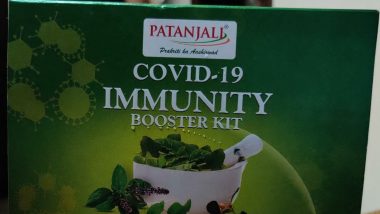 However, hours after its launch, the AYUSH ministry expressed unawareness about the development and Patanjali was stopped from advertising Coronil. A notice was issued to Patanjali Ayurved after it launched Coronil tablet and Swasari Vati medicine. In its response, the Haridwar-based organisation said that it never claimed to have made medicine for coronavirus. Patanjali Said No 'Corona Kit' Packaged by Them: Uttarakhand Ayurved Dept.

"Patanjali has never claimed to make corona medicine. Rather, corona patients have been cured with this medicine. The drug was made under the license issued by the Ayush Ministry," stated the reply by Patanjali Ayurved CEO Acharya Balkrishna to the notice.

"We made the combination of Tulsi Giloy Ashwagandha at an advanced level and when the clinical trials were done on the patients of COVID-19, the coronavirus patients were cured. A conspiracy has been hatched against us and if the Ayush Ministry tells us to conduct clinical trials once again then we are ready to face it," he added.

(The above story first appeared on LatestLY on Jun 30, 2020 11:13 PM IST. For more news and updates on politics, world, sports, entertainment and lifestyle, log on to our website latestly.com).