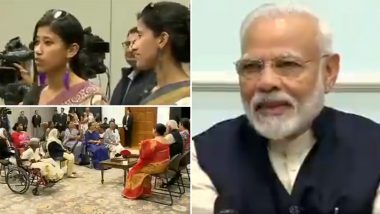 "When you started your work, you must have done it as a mission or to do something valuable in life or would have just gone with the flow. It must have not been for reward but today you have become an inspiration for others," the Prime Minister told the recipients. International Women's Day 2020: 104-Year Old Woman Man Kaur to Be Awarded 'Nari Shakti Puraskar' by Ram Nath Kovind for Achievements in Athletics.

Before the award ceremony, a special screening of "Swachh Bharat - India's Sanitation Story" was held at RBCC. This short film showcases the massive behaviour change that occurred across rural India under the Swachh Bharat Mission and the role that women played in leading over 55 crore people to shun the age-old practice of open defecation.

(The above story first appeared on LatestLY on Mar 08, 2020 05:51 PM IST. For more news and updates on politics, world, sports, entertainment and lifestyle, log on to our website latestly.com).