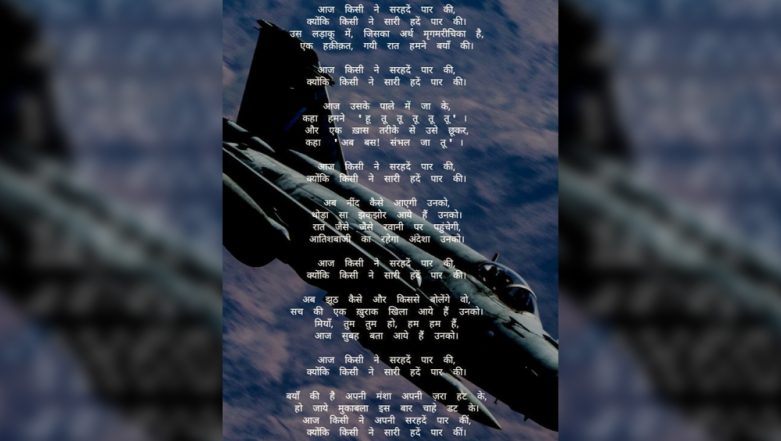 New Delhi, March 8: The Indian Air Force on Friday trolled Pakistan with a poem suggesting that its Mirage 2000 fighter jets had to cross over into Pakistan as Islamabad had crossed its limits by attacking CRPF personnel in Pulwama.

The Indian Air Force through its Twitter handle @iaf_mcc tweeted a Hindi poem by a poet named Bipin Illahabadi titled ‘Hadd Sarhad Ki, (limits of the border) this morning which suggests the reasons for the Air Force to have crossed the border and attack the Jaish terrorist camp in mainland Pakistan. Pulwama Aftermath: Pakistan Tried to Hack Over 90 Indian Websites, Failed Miserably.

The poem in Hindi, in the beginning, says that a fighter whose name is 'Mrigmarichika’ (Mirage) had to cross over the boundaries as someone had crossed all the limits.

The poet has hinted about the cross-border strike by the Air Force on the night of February 26 in which 12 Mirage 2000 fighter jets crossed over the Line of Control in Jammu and Kashmir and pounded a Jaish-e-Mohammed terrorist training camp in Balakot in Pakistan's Khyber Pakhtunkhwa province.

About the late night air strike, the poet also suggests that the enemy would be extra cautious in the nights as they would be living in fear of “fireworks” at that time. The poem says that we have crossed the boundaries this time and touched the adversary in a unique way to warn him to mend his ways.

The poem also goes on to say that the adversary has been given a dose of truth and he cannot lie now. The Air Force has come up with the Hindi poetry to troll the Pakistanis at a time when Pakistan Prime Minister Imran Khan started tweeting in Hindi on the ongoing conflict with India.