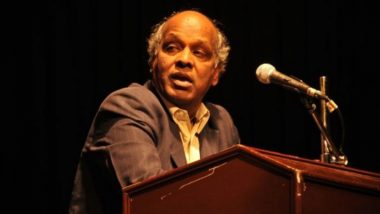 New Delhi, August 11: Rahat Indori, renowned poet and lyricist, died of heart attack after being tested positive for coronavirus on Tuesday. Earlier in the day, Indori had tested positive for COVID-19 and was admitted in the ICU of a hospital in Madhya Pradesh's Indore city.  Indori's son had informed that his father is suffering from chronic ailments like heart disease and diabetes.  According to a tweet by ANI, Dr Vinod Bhandari, Sri Aurobindo Hospital  confirmed the news of Indori's demise and said that he passed away at the hospital.

The doctor said that Indori suffered two heart attacks today and could not be saved. Bhandari further added saying that Indori was admitted to hospital on Sunday, after testing positive for COVID-19 and he had 60% pneumonia. Indori was undergoing treatment in Sri Aurobindo Institute of Medical Sciences, where the chest department head Dr Ravi Dosi said that the poet has pneumonia and was being given oxygen.

Urdu poet Rahat Indori (file pic) passes away at the hospital. He suffered two heart attacks today and could not be saved. He was admitted to hospital on Sunday, after testing positive for #COVID19. He had 60% pneumonia: Dr Vinod Bhandari, Sri Aurobindo Hospital pic.twitter.com/EIKZhPp702

Madhya Pradesh chief minister Shivraj Singh Chouhan in a tweet wished the famous poet a speedy recovery after he was diagnosed with coronavirus infection. The 70-year-old poet had tweeted asking people to pray that he defeats this disease as soon as possible. "After initial symptoms of COVID-19, my corona test was done yesterday which came out positive. Pray that I defeat this disease as soon as possible," Indori had tweeted.

(The above story first appeared on LatestLY on Aug 11, 2020 05:29 PM IST. For more news and updates on politics, world, sports, entertainment and lifestyle, log on to our website latestly.com).