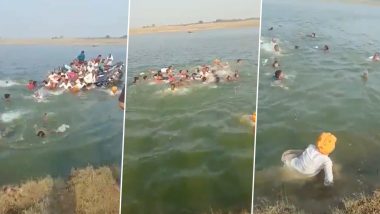 Kota, September 16: At least 10 people lost their lives after a boat capsized in Chambal river of Rajasthan’s Kota district on Wednesday. According to reports, around 50 people were on the boat at the time of the incident. People were travelling to Kamleshwar Dham near Gothda Kalaan in Bundi district. Mumbai: Ferry Boat 'Ajanta' Capsizes Off Mandwa Beach, All Passengers Rescued.

According to eyewitnesses, the boat capsized due to strong current of the river. Locals also rescued may people. The rescue operation is currently underway. A large number number of women were reportedly travelling on the boat. The incident took place near the Dhibri Chambal area under the Khatoli police station limits of Kota. Karnataka: 16 Dead as Boat Capsizes Off Karwar Coast; Search Operation Underway.

Senior officials have rushed to the spot. "A boat carrying over 40 devotees to a temple in Indergarh area of Bundi district capsized in Chambal river under Khatoli police station of Kota district at around 8.45 am on Wednesday," Superintendent of Police, Kota Rural, Sharad Choudhary told PTI. Around 10-12 people are still missing

(The above story first appeared on LatestLY on Sep 16, 2020 11:13 AM IST. For more news and updates on politics, world, sports, entertainment and lifestyle, log on to our website latestly.com).