Rajya Sabha Elections 2020: Polling For 11 Seats From Uttar Pradesh And Uttarakhand to be Held on November 9; Check Complete Schedule

The Election Commission of India on Tuesday announced the schedule of elections for 11 Rajya Sabha seats. These elections will be held for 10 seats in Uttar Pradesh and one seat in Uttarakhand. Voting on these seats will take place on November 9. 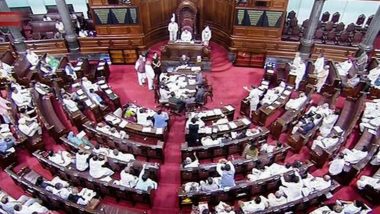 New Delhi, October 13: The Election Commission of India on Tuesday announced the schedule of elections for 11 Rajya Sabha seats. These elections will be held for 10 seats in Uttar Pradesh and one seat in Uttarakhand. Voting on these seats will take place on November 9. Counting of votes will be conducted on the same day.

According to the EC, the elections have to be completed by November 11. The notification will be issued on October 20. Candidates can file their nominations by October 27. Meanwhile, scrutiny of papers will be done on October 28. The last date of withdrawal of nomination papers is November 9. Rajya Sabha Elections 2020: BJP Likely to Add 9 RS Seat in June 19 Polls, NDA Aims to Cross 100-Mark Tally in Upper House.

Election Commission of India announces dates for elections to 11 Rajya Sabha seats as the term of these members (10 from Uttar Pradesh, one from Uttarakhand) is set to expire on 25th November.

Election to be completed before 11th November. pic.twitter.com/OWKAyLRI92

The ECI in the statement said, “The Commission has directed that for the purpose of marking preference(s) on the ballot paper only integrated violet colour sketch pen(s) of pre-fixed specification, provided by the Returning Officer, shall be used. No other pen shall, under any circumstances, be used in the above said elections. Rajya Sabha Deputy Chairman Election 2020: How The Numbers Stack Up in Fight Between Harivansh Narayan Singh And Manoj Kumar Jha.

The Commission has also appointed the Chief Electoral Officers concerned as Observer of the election in the respective States. The ECI has also issued made it mandatory for people to wear face masks and to maintain social distancing during the election. Thermal Scanning of all people should be carried out.

(The above story first appeared on LatestLY on Oct 13, 2020 12:47 PM IST. For more news and updates on politics, world, sports, entertainment and lifestyle, log on to our website latestly.com).