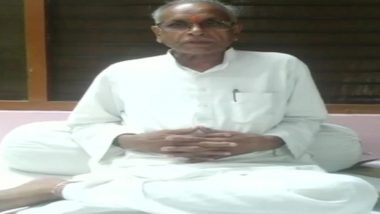 Ayodhya, July 28: Champat Rai, General Secretary of Sri Ram Janmabhoomi Teertha Kshetra Trust, on Tuesday contradicted with Kameshwar Chaupal, lone Dalit member of the trust, and said no time capsule will be placed below the site on which the Ram Mandir is being constructed. "All reports about placing of a time capsule under the ground at Ram temple construction site on August 5 are false. Do not believe in any such rumour," Champat Rai told news agency ANI.

Kameshwar Chaupal had last week said that a time capsule, enlisting the history and facts related to the Ram Janmabhoomi, will be placed thousands of feet below the Ram temple construction site. "The struggle for Ram Janmabhoomi, including the long-drawn case in the Supreme Court, has given a lesson for the current and upcoming generations. A time capsule will be placed about 2,000 feet down in ground at Ram Temple construction site. So, that in future anyone who wishes to study about the history of the temple, he'll get the facts related to Ram Janmabhoomi, so that no new controversy can arise," he had told ANI.

Chaupal had also said that the time capsule would be placed inside a Tamra Patra (copper plate) before being placed below the site. The proposed Ram temple would have a height of 161 feet along with five domes. Prime Minister Modi is scheduled to lay the foundation stone of the Ram temple in Ayodhya on August 5, according to Mahant Nritya Gopal Das, the president of the trust.

What is a Time Capsule?

A time capsule is a container storing a historic cache of information or goods or objects to communicate with future generations. It is buried for discovery in the future. It helps archaeologists, historians and anthropologists to study about a site. Generally, time capsules are buried at the foundations of the buildings.

The construction of Ram temple in Ayodhya will begin after the ceremony to lay the foundation stone (bhoomi poojan) in which chief ministers of all states, ministers from the union cabinet and RSS chief Mohan Bhagwat are also likely to participate. Ram Temple Bhumi Pujan: Time Decided For Event Is 'Inauspicious', Says Shankaracharya Swaroopanand Saraswati.

The Supreme Court had in November last year directed the central government to hand over the site at Ayodhya, where Babari Masjid once stood, for the construction of the Ram temple and set up a trust for this. The five-judge bench said that the Sunni Waqf Board, which was a party to the 7-decade-old title suit, should be given an alternate five-acre land at some other suitable place for construction of a mosque.

(The above story first appeared on LatestLY on Jul 28, 2020 02:30 PM IST. For more news and updates on politics, world, sports, entertainment and lifestyle, log on to our website latestly.com).