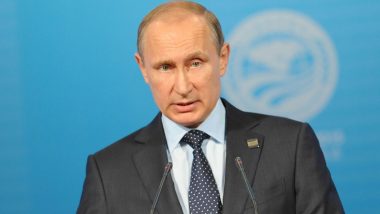 "Please accept my deepest condolences in connection with the tragic consequences of a passenger plane crash in the city of Kozhikode," Putin noted. Air India Express Flight Crash: Captain of Aircraft Deepak Vasant Sathe, Who Died in Kozhikode Mishap, Was Ex-IAF Pilot; Here's More About Him.

18 passengers of an Air India Express flight died after it crash-landed in Kozhikode, Kerala yesterday. pic.twitter.com/nr1sCwIBgf

"I ask you to convey my words of sympathy and support to the families and friends of the victims, as well as wishes of a speedy recovery to all those who gave suffered from this disaster," the Russian President added.

An Air India Express plane crash-landed while landing at Kozhikode airport on Friday. The landing took place amid heavy rainfall and the aircraft approached the airport twice due to unfavourable conditions. It had 190 people on board. The plane was en-route from Dubai.

(The above story first appeared on LatestLY on Aug 08, 2020 07:18 PM IST. For more news and updates on politics, world, sports, entertainment and lifestyle, log on to our website latestly.com).