Firing yet another salvo at Rajasthan Chief Minister Ashok Gehlot, his former deputy on Thursday asked why action has not been taken in the last four years on allegations levelled collectively by the Congress against BJP leader Vasundhara Raje during the last assembly elections. 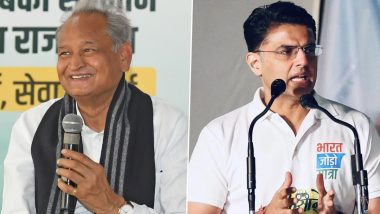 Jaipur, January 19: Firing yet another salvo at Rajasthan Chief Minister Ashok Gehlot, his former deputy on Thursday asked why action has not been taken in the last four years on allegations levelled collectively by the Congress against BJP leader Vasundhara Raje during the last assembly elections.

He said BJP leaders at the Centre make false allegations against Rahul Gandhi and Sonia Gandhi, cases against them are lodged, they are summoned by Enforcement Directorate for questioning and they are thus insulted but wondered why does the Congress government in Rajasthan has not taken action against those BJP leaders who were involved in corruption. Congress Infighting: Sachin Pilot Attacks Own Government in Rajasthan, Says Catch the Mastermind Instead of Paper Leak Agents.

This is the fourth day in a row when Pilot has attacked the government of his party in the state led by Gehlot, with whom he is in a power tussle ever since the Congress formed the government in December 2018. Ashok Gehlot-Sachin Pilot Tussle: Solution That Will Strengthen Congress in Rajasthan Will Be Found, Says Jairam Ramesh.

While addressing a Kisan Sammelan in Pali district, he hoped that the action would be taken by the government in the remaining 11 months of its rule.

"I do not want to work with vendetta but we have to take action against those whose corruption was exposed by us. We had constantly challenged the then Vasundhra Raje government, her name was alleged in every scam.

"We had promised that after coming to power, an investigation into the scams will be done and the guilty will be punished so that trust of people in the system is maintained," Pilot said.

He also referred to the earlier term of the Congress from 2008 to 2013 and said that the Mathur commission was constituted to probe corruption charges against the previous BJP government (2003-2008) but nothing happened that time.

"This time also, four years of the government have passed. Just 11 months are left. I hope that action will be taken," he said.

Pilot has targeted the state government over repeated incidents of paper leaks, sidelining of Congress workers and giving political appointments to retired bureaucrats in his rallies which he began from Jat-dominated Nagaur on Monday. He will address the last meeting in Jaipur on Friday.