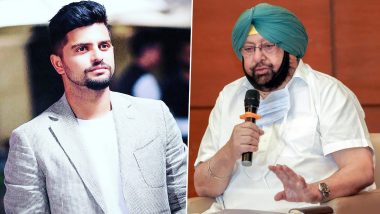 Amritsar, September 16: Punjab Chief Minister Captain Amarinder Singh on Wednesday asserted that the state police have solved the case of an attack on relatives of cricketer Suresh Raina by armed robbers. CM Amarinder Singh said the police have arrested three members of an inter-state gang of robber-criminals who were allegedly involved in the attack on Suresh Raina's relatives. Eleven other accused are yet to be arrested.

Ashok Kumar, Suresh Raina's uncle, and his son Kaushal died in the attack, while Ashok Kumar's wife, Asha Rani, was critically injured. They were attacked while asleep on the terrace of their residence in Thariyal village near Madhopur in Punjab's Pathankot district on the night of August 19. The robbers who attacked were from the notorious 'Kale Kachhewala' gang. They were armed with lethal weapons.

Following the violent attack on his aunt's family, Raina, who plays for the Chennai Super Kings, had returned to India after quitting the Indian Premier League, which begins on September 19. Raina retired from international cricket on August 15, alongside former India captain Mahendra Singh Dhoni. The Punjab Director General of Police (DGP) set up a Special Investigation Team (SIT) to probe the attack. Specialised teams from Organised Crime Control Unit were roped in for a 24X7 probe into the case. IPL 2020: Suresh Raina's Absence Will Leave a Big Gap in CSK, Says Albie Morkel.

Raina had described the attack on his aunt's family as "beyond horrible". The 33-year-old had urged the Punjab government to bring the perpetrators to justice. "We at least deserve to know who did this heinous act to them. Those criminals should not be spared to commit more crimes," he had said.

(The above story first appeared on LatestLY on Sep 16, 2020 12:26 PM IST. For more news and updates on politics, world, sports, entertainment and lifestyle, log on to our website latestly.com).