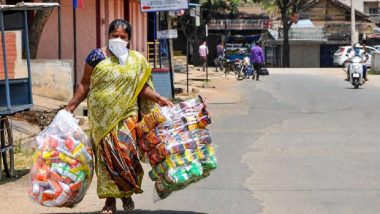 Chennai, June 29: The Tamil Nadu government on Monday announced an extension in the current spate of lockdown till July 31. A press release was issued by Chief Minister Edappadi Palaniswami to confirm that the incumbent set of restrictions would remain in force till end of the next month. Tamil Nadu Reports Highest Single-Day Spike of 3,949 Coronavirus Cases.

The strict measures or "complete lockdown", that was imposed in Chennai, Madurai and other surrounding regions since June 19 will remain, said reports citing the government order.

The extension of curbs amid an alarming spike in coronavirus cases across the state, with the overall tally crossing 86,000 today. The lockdown extension order came despite an expert medical panel advising the government against continuing the restrictions.

The panel, which held a review meeting with CM Palaniswami, said prolonging the lockdown beyond June 30 is not necessitated as restricting public movement is not the only way to control the disease.

Prabhdeep Kaur, Deputy Director, National Institute of Epidemiology (NIE), said the expert committee suggested the Chief Minister to consider the socio-economic effect of lockdown before finalising the decision to extend the same.

Notably, the southern Indian state clocked its highest-single day spike today with a total of 3,949 new infections. The overall count surged to 86,224, whereas, the death toll climbed to 1,141 with 62 new fatalities.

Despite the state recording more than 3,000 cases per day for nearly a week's period, the expert panel was against the imposition of lockdown as the rise in numbers is being attributed to an increased number of tests. Most of the new infections are mild and are considered to be curable through symptomatic treatment.

A total of 30,039 more samples were tested in the past 24 hours, taking the state's total to about 11.40 lakh, said a statement issued by the State Health Department. The maximum cases are centred in state capital Chennai, where the tally of infections has reached 55,969.

(The above story first appeared on LatestLY on Jun 29, 2020 08:41 PM IST. For more news and updates on politics, world, sports, entertainment and lifestyle, log on to our website latestly.com).